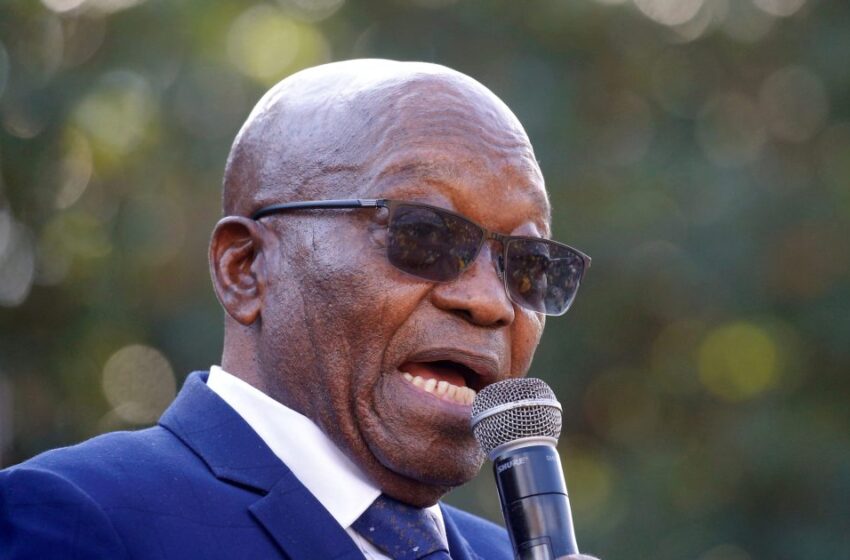 The long-running corruption trial of South Africa’s former President Jacob Zuma, whose imprisonment on a separate charge sparked days of deadly unrests and looting across the country, has resumed.

Zuma appeared virtually in the Pietermaritzburg High Court on Monday, where he faces 16 charges of fraud, corruption and racketeering related to the 1999 purchase of fighter jets, patrol boats and military gear from five European arms firms when he was deputy president.

The 79-year-old is accused of taking bribes from one of the firms, French defence giant Thales, which has been charged with corruption and money laundering.

The trial began in May but has faced several postponements and delays as Zuma’s legal team sought to have charges dropped.

On Monday, the former president’s legal team petitioned for the trial to again be delayed, arguing a defendant has a right to appear in court in person. Zuma had previously physically appeared in court during the opening of the trial to proclaim his innocence.

On June 29, the former president was found guilty of contempt of South Africa’s top court for disobeying a Constitutional Court order to testify before a judicial panel conducting a separate probe of corruption during his presidency.

His imprisonment a week later sparked widespread violent protests, looting and arson in his home province of KwaZulu-Natal as well as Gauteng province that has left commercial areas ransacked and at least 200 people dead.

On Monday, armoured vehicles and heavily armed soldiers and police were stationed outside the court amid fears the resumption of the trial would spark further violent protests, which had eased over the weekend.

“It was feared or thought that Zuma’s supporters would use this hearing today as an opportunity to show their support for the former president,” Al Jazeera’s Bernard Smith reported from Pietermaritzburg.

“That’s why there’s a very heavy police and military presence. A park … where they normally gather has actually also been sealed off.”

Still, Smith reported, there was little in the way of demonstrations as the proceedings began.

“It’s not even possible for people to get particularly close (to the court). This country is also going through a very severe COVID outbreak and is in lockdown which may have dissuaded some people,” he said.

Zuma, a veteran of the struggle against white minority rule, served as South Africa’s president from 2009 to 2018 before resigning under pressure from his party, the African National Congress (ANC), amid declining public support and public anger at the corruption allegations.

Once dubbed the “Teflon president”, Zuma and his backers have repeatedly dismissed scrutiny of his conduct and deny stoking the current unrest.

His lawyers are currently seeking to overturn his 15-month prison term.