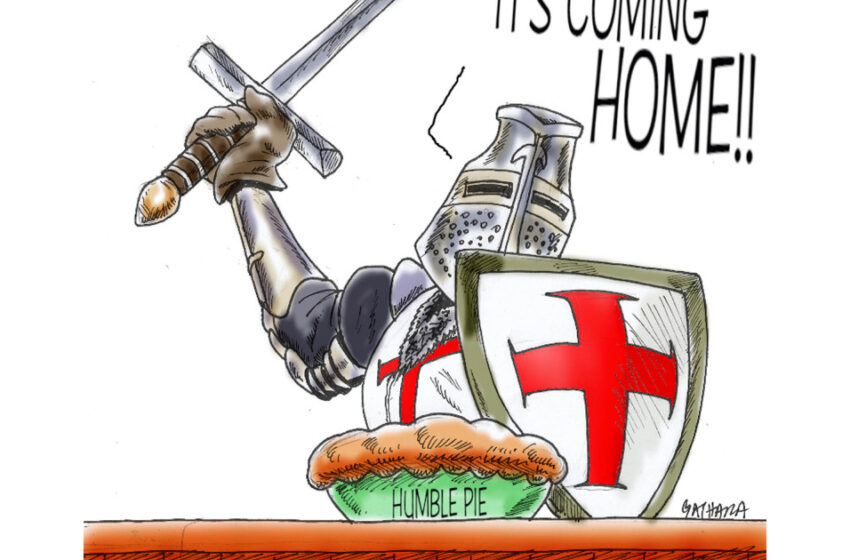 A devastating loss by the England team, following a campaign of overblown hype, has become a feature of modern international football competitions many around the world enjoy witnessing. In this respect, the Euro 2020 final did not disappoint.

“It’s coming home,” English media and pundits had declared. Even weathermen had been conscripted into the national service, making comparisons with weather conditions during the 1966 World Cup final, the last time the England team had made it to the last game in a major international tournament.

I watched the game on tenterhooks, initially despairing after England took an early lead and rejoicing when Italy equalised. The penalty shoot-out that decided the game was similarly fraught and it was not until the last kick of the match that I sighed with relief. Italy were champions, England convulsing in all-too-familiar self-humiliation.

Football has always seemed to inspire both the best and the worst in many societies. But why was I, a Kenyan, watching Euro2020 thousands of kilometres away, so invested in English pain? English fans are hardly the only ones around the world to behave abominably. Racism is rife across European club and international football, and fan violence is never far away.

Such behaviour will always breed resentment but the seemingly unique English mix of arrogance, feeling of entitlement and empty bluster combined with a history of domination and abuse of societies around the globe provoke a special kind of animus. “England are judged by different standards than other countries,” notes Irish writer Lee Hurley in a 2018 article on the origins of accusations of England World Cup arrogance.

Every year, it seems, the world is treated to the loud beating of English breasts over the latest failure of their team and invocations of 1966, the last time the country won a major international football trophy. This often verges on the comical and inspires mockery. For example, The National, a Scottish pro-independence daily, featured on its front page on the eve of the final an image of Italian manager Roberto Mancini as Scottish hero William Wallace, pleading with him: “Save us Roberto, you’re our FINAL HOPE (We can’t take another 55 years of them banging on about this!)”

Many times, though, this English fixation on winning a football trophy can also come across as dark bewilderment at unfulfilled destiny – an extension of the idea that the English were born to dominate the world. Sure, the same could be said about Brazil and the stories of fans getting heart attacks following losses at the World Cup. But Brazil did not sail around the world brutalising and pillaging societies while presenting itself as the pinnacle of human achievement. The English are being judged through the lens of their history.

Other former colonial powers also participated in Euro2020. The Spanish, French, Belgians and Portuguese have similarly terrible histories and have arguably behaved just as badly.

However, their ability to project their voices in today’s global media is much smaller than that of the British, who, along with their American cousins, can outshout anyone. The media megaphone means people around the world, and especially in the English-speaking world, are constantly assaulted with British and English self-portrayals that many times run counter to their lived experiences of domination and colonisation.

Given such circumstances, even seemingly mundane and innocuous practices meant to build up the national mood can take on ominous undertones. Take the slogan “It’s coming home,” which is a verse from a 1996 self-deprecating song composed by two English comedians. To many English people, this is harmless sloganeering of the sort others engage in when they call their preferred sides the best in the world. Greece, for instance, chose “Welcome home” as its official motto when it hosted the 2004 Olympic Games.

However, outside England, people hear something rather different. “To many around the world, especially those still experiencing a post-colonial legacy,” writes Hurley, “the England football team is a symbol of [the British] state. Unsurprisingly, some people aren’t that fond of England when it makes an appearance on the world stage. When England then starts going on about taking something back to its rightful place…well, you can see how that might cause a problem or two.”

In the wake of the Black Lives Matter movement that has swept the globe, with the attendant demands for a re-appraisal of histories of enslavement and colonial oppression, slogans like “It’s coming home” can feel completely tone-deaf. And they sound even worse in the context of a nation that steadfastly refuses to re-examine its past conduct and instead appears to glamorise “Empire”, while its political leaders encourage fans to boo players for taking a stand against systemic injustice.

Ironically, unlike Italy, England fielded one of the more racially diverse teams at the tournament, and all but four of the players in the final were of immigrant stock. As Clint Smith says in The Atlantic, the squad is much different from the all-white squad that won the World Cup more than half a century ago and in many ways, its ethnic makeup is unlike the overwhelmingly white country it represents. It is a team that has been embraced by many of England’s marginalised minority communities as evidence of their inclusion, belonging and contribution.

Although Smith is neither English nor living in England, he captures the sentiments of many when he says: “Maybe I am cheering less for England the country and more for the sort of future this new generation of players represents.”

One Tariq Jenner on Twitter put it more graphically: “I want England to win, cos I want this young team of anti-racists that stood up for their beliefs and those less fortunate than themselves despite boos and abuse, to win. Not because I feel that this rainy little racist dumpster fire of country deserves it.”

As a human being, I feel for the England players, on whose young shoulders have been placed the unfair burdens of the country’s history and its hopes of redemption. Yet, despite this heavy onus, they still made it a thriller of a game and a tournament. Hats off to them.

As a Kenyan though, I will not-so-secretly enjoy my share of good-natured schadenfreude at English woes and inevitable self-flagellation and wait for the World Cup next year when we can do it all over again.