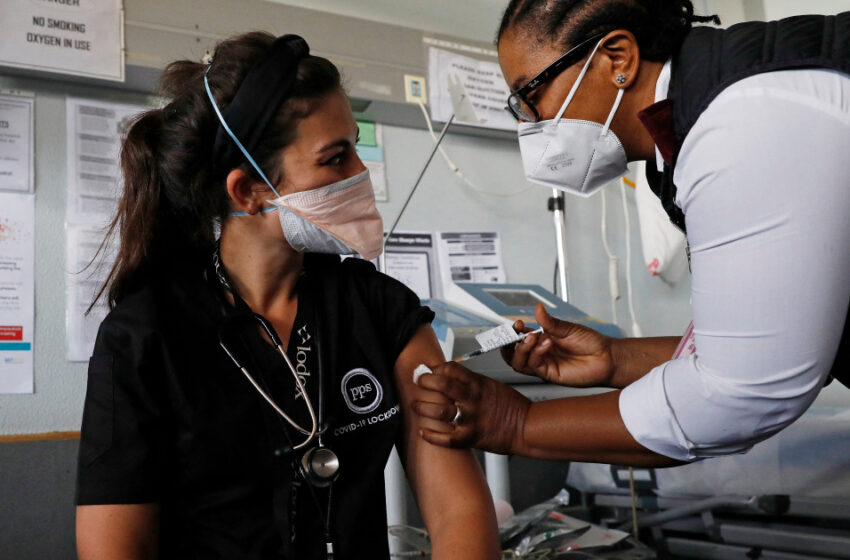 The World Health Organization (WHO) has said it is setting up a hub in South Africa to give companies from poor and middle-income countries the know-how and licences to produce COVID-19 vaccines, in what President Cyril Ramaphosa called an historic step to spread lifesaving technology.

The “tech transfer hub” could make it possible for African companies to begin manufacturing mRNA vaccines – the advanced technology now used in shots from Pfizer-BioNTech and Moderna – in as little as nine to 12 months, the WHO said.

WHO Director-General Tedros Adhanom Ghebreyesus made the announcement aimed at boosting access to vaccines across the African continent, where coronavirus infections and deaths increased by almost 40 percent over the past week.

“Today I am delighted to announce that WHO is in discussions with a consortium of companies and institutions to establish a technology transfer hub in South Africa,” Tedros said during a press briefing in Geneva on Monday.

“The consortium involves a company Afrigen Biologics & Vaccines, which will act as the hub both by manufacturing mRNA vaccines itself & by providing training to a manufacturer Biovac,” he added.

« Today I am delighted to announce that WHO is in discussions with a consortium of companies and institutions to establish a technology transfer hub in #SouthAfrica« –@DrTedros https://t.co/w1MC0Adxj9

WHO chief scientist Soumya Swaminathan said there were several options on the table, mainly smaller companies and biotechs, adding: “We are also in discussions with larger mRNA companies and hope very much they will come on board.”

Pfizer and BioNTech, along with Moderna, are the main producers of COVID-19 vaccines using mRNA technology.

“We could see within nine to 12 months vaccines being produced in Africa, South Africa,” Swaminathan said.

‘Change the narrative of Africa’

Ramaphosa said the initiative “will change the narrative of an Africa that is a centre of disease and poor development”.

“This landmark initiative is a major advance in the international effort to build vaccine development and manufacturing capacity that will put Africa on a path to self-determination,” he said.

The South African president, referring to talks at the World Trade Organization (WTO) on its proposal for a waiver on intellectual property on COVID-19 vaccines, added: “Today is historic and we see this as a step in the right direction but it does not distract us from our original proposal put together by India and South Africa that we should see a TRIPS waiver at the WTO.”

This initiative will not just benefit South Africa, but working together with the @AfricaCDC and the @WHO we will make sure that it benefits the entire African continent. https://t.co/2M2woSz9OI

The South African president said many people in developing countries were “still struggling for access to vaccines that are made in their billions in the North”.

He said the unequal vaccine distribution was unfair, describing those in rich countries as having lives “worth much more than the lives of those in poorer countries”.

Campaigners welcomed the move and urged the pharmaceutical companies to go further.

“What needs to happen next is Moderna and Pfizer/BioNTech must immediately share their mRNA technology with the hub so that many more mRNA vaccines can be produced independently by manufacturers in South Africa and more broadly on the African continent, as soon as possible,” Kate Stegeman, Advocacy Coordinator, MSF Access Campaign in South Africa, said in a statement.

“All pharmaceutical corporations that share their technology with the hub through technology transfer agreements must do so in a transparent and non-restrictive way to maximize the chance of success: any licenses must include all low- and middle-income countries, and technology recipients must be free to build on the platform technology to tackle other health threats.”

Also on Monday, WHO emergencies chief Dr Michael Ryan said the UN health agency would follow up with Olympic and Japanese authorities about their decision on Monday to allow domestic fans to attend the summer games.

Ryan noted that Japan’s recent COVID-19 rates were lower than those seen in many other countries, including the United Kingdom, United States, France and the Netherlands.