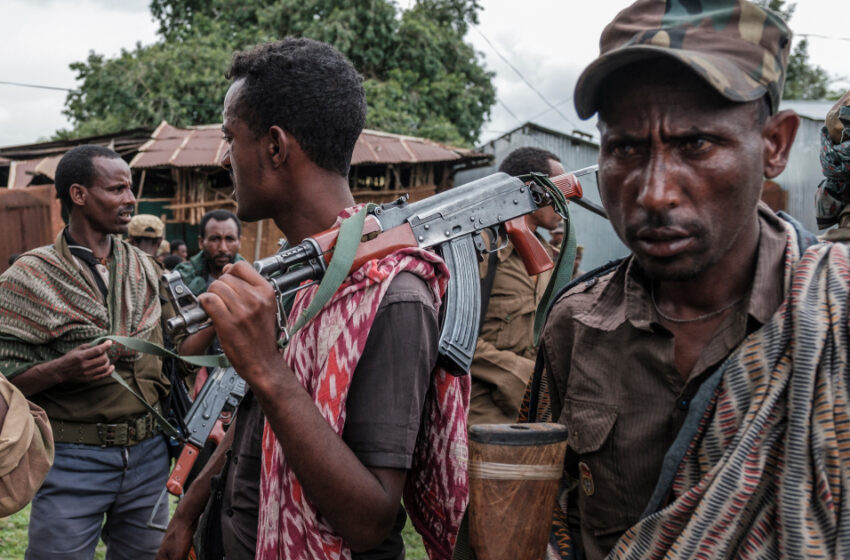 Bahir Dar, Ethiopia – Tigrayan fighters this week launched a new offensive along the southern border area with the Amhara region to retake territory they say was seized by Amhara fighters during the ongoing war in Ethiopia’s northernmost region of Tigray.

The eight-month conflict has pitted the Ethiopian army and its allied Eritrean troops and fighters from Ethiopia’s next-door Amhara region against forces loyal to the region’s former governing party, the Tigray People’s Liberation Front (TPLF).

The Tigrayan fighters, rebranded recently as the Tigray Defence Forces (TDF), retook the regional capital, Mekelle, in late June. Federal troops have since withdrawn from much of Tigray and the government in Addis Ababa declared a unilateral ceasefire, but Amhara forces say they will hold onto disputed territories in the western and southern Tigray.

Al Jazeera spoke to Fanta Mandefro, deputy president of the Amhara region, who said additional Amhara special forces had been deployed to the borders to defend their land and people. The interview below has slightly been edited for brevity and clarity.

Al Jazeera: The TDF is pushing southwards and westwards, taking key towns such as Korem, Alamata and Raya. They say they are reclaiming their land. What is your reaction?

Fanta Mandefro: The Amhara regional government is defending its people against the aggression of TPLF, which has opened an aggressive war that is targeting civilians with the objective of ethnic cleansing.

In response to this, the Amhara regional government is defending its people and calling upon people to defend themselves in their own villages to stand against the aggressor, not to be victim of such atrocities.

Al Jazeera: So, are you calling on civilians to take up arms?

Fanta: Yes, just to protect themselves. Meaning, in their own village, they have to be aware, they should not be victims. They are not armed in any way. In some places, they have been pushed out of their homes. People who fled the atrocities are witnessing this.

Al Jazeera: How can they defend themselves?

Fanta: They should be aware and whenever the aggressors come, they have to prepare in any way to defend themselves using any mechanism they have.

It’s a sad moment for civilians. This is the planting season and people are forced to evacuate from their farms and villages.

Al Jazeera: Does this call for civilians to take up arms effectively means the ceasefire is over?

Fanta: No. The [federal] government declared a ceasefire and moved out of Tigray. But now the TPLF forces are invading southwards and committing atrocities. So it is not legitimate for our [regional] government to sit down when our people are persecuted, indefinitely pushed out from their villages, when they are displaced, when infrastructure is damaged.

The unilateral ceasefire is not broken but that does not mean our regional government will sit simply when our people are displaced and killed. We have never gone a single inch into the Tigray side. We are just defending our own land.

Al Jazeera: The TPLF will dispute this, they will say these are Tigrayan territories, officially recognised and mapped. They say Amhara forces used the conflict to seize Tigrayan land.

Fanta: There have been no historical disputes about those lands. When TPLF came to power in 1991, it unilaterally decided on those areas and decided on the wrongful demarcations. Even during that time, the territories were not legally part of the Tigrayan land.

We are talking about the last 30 years. The Amhara people never endorsed the annexation back then. We were never consulted. The land was taken unilaterally by the TPLF – and it’s not just about land.

We are also talking about the freedom of our people, the people who have been persecuted for 30 years, eliminated, faced ethnic cleansing. That is what happened in Welkait (western Tigray), Raya (southern Tigray) and so many other places. They eliminated our people and settled their own people.

Al Jazeera: The Tigrayan forces say they will not give up until they have all their land back. How big a concern is this to you?

Fanta: It is not a matter of concern. It’s a reality.

Al Jazeera: So you are deploying more troops to the front lines?

Fanta: We will defend our people. That’s all. We won’t move our troops an inch into Tigray territory but we will defend our people. They have been the subject of mistreatment and inhuman treatment. I call on the international community to not allow this. It should not only be the responsibility of the Amhara regional government and the federal government of Ethiopia. It should also be the responsibility of the international community to protect civilians from atrocities.

Al Jazeera: Amhara forces (ASF), Ethiopian federal troops and Eritrean soldiers have also been accused by rights groups of atrocities. The ASF has specifically been blamed for destroying the bridges over the Tekeze River.

Fanta: I don’t have any information of our troops committing atrocities. Those agencies should bring proper evidence.

About the Tekeze bridge, TPLF forces are known for destroying infrastructure and then pointing a finger to other groups.

Al Jazeera: So Amhara forces did not destroy the bridge?

Al Jazeera: Do you have evidence that it is the TDF that blew up the bridge?

They should stop the aggression, stop invading other people and committing atrocities. There is no profit from any conflict. Conflict is damaging.