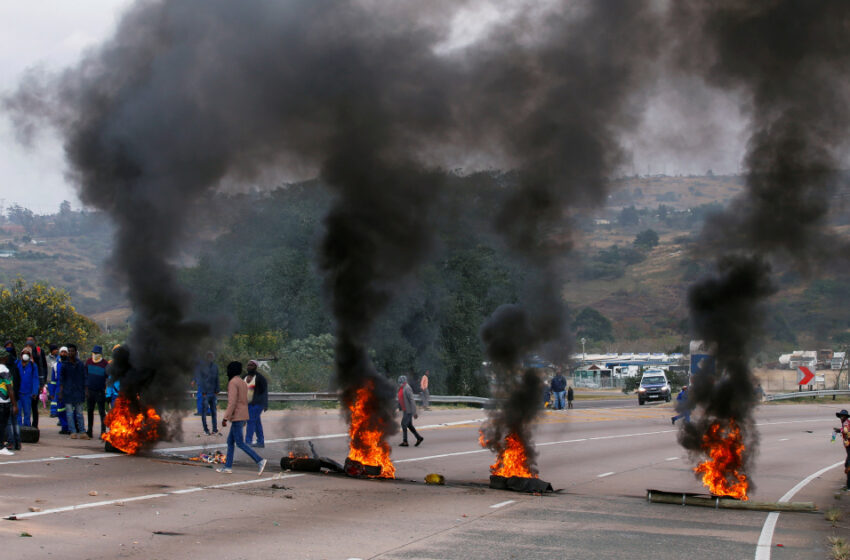 South African police have arrested 28 people and one of the country’s biggest highways remained closed over violent protests against the imprisonment of former President Jacob Zuma.

Protests erupted this week in parts of KwaZulu-Natal (KZN), Zuma’s home province, after the ex-leader handed himself over to police to serve a 15-month jail term for contempt of court.

On Friday, the high court dismissed Zuma’s application to have his arrest overturned in a case that has been seen as a test of the rule of law in the post-apartheid nation.

Zuma’s imprisonment has laid bare deep divisions in the governing African National Congress (ANC), as a party faction remains loyal to the former president and has been a potent source of opposition to his successor, Cyril Ramaphosa.

He said protesters had set alight some trucks near Mooi River, a town on the N3 highway that leads from Durban to Johannesburg, and shops had been looted in Mooi River and eThekwini, the municipality that includes Durban.

Law enforcement officers had been deployed to all districts in the province but there had been no deaths or injuries so far, he added. The N3 was closed at Mooi River in the early afternoon on Saturday.

Ramaphosa, whose allies engineered Zuma’s removal in 2018, said in a statement that “criminal elements must be met with the full might of the law.”

Asked about the protests by public broadcaster SABC, a spokesman for Zuma’s charitable foundation said: “The righteous anger of the people is because of the injustices that they see being dispensed to President Zuma.”

Zuma was given the jail term for defying an order from the constitutional court to give evidence at an inquiry investigating high-level corruption during his nine years in power.

He denies there was widespread corruption under his leadership but has refused to cooperate with the inquiry that was set up in his final weeks in office.

Zuma has challenged his sentence in the constitutional court, partly on the grounds of his alleged frail health and the risk of catching COVID-19. That challenge will be heard on Monday.

KZN Premier Sihle Zikalala said in a video message the provincial government understood the “extreme anger” of those protesting.

“We find ourselves in a … unique situation wherein we are dealing with the arrest of the former president,” he said. “Unfortunately violence and destruction often attack and affect even people who are not involved.”