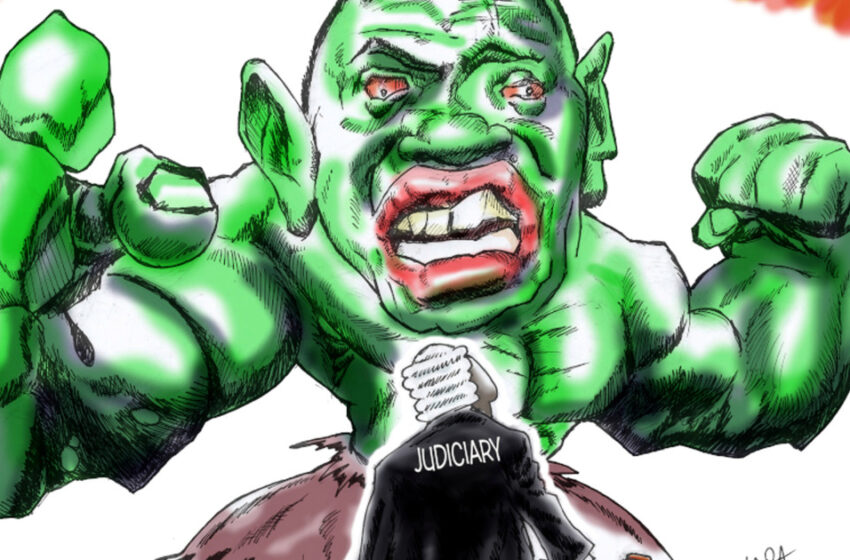 The simmering conflict between Kenyan President Uhuru Kenyatta and the country’s judiciary over the supremacy of the constitution has once again burst into the open. This time the battle has been precipitated by the president’s attempt to usurp the powers of the Judicial Service Commission (JSC) to pick judges and judicial officers for the country’s courts.

For two years, claiming secret adverse findings against them by intelligence services, Kenyatta has refused to formally appoint 41 individuals selected by the JSC to fill various posts including in the Court of Appeal. This is in defiance of the constitution, which affords him no discretion in the matter, and numerous court rulings affirming that. This week, he partly complied, appointing 34 of them, but petulantly continuing to block six others (one had died in the interim).

His stance has been roundly condemned by civil society groups, parliamentarians and even the former chief justice, Willy Mutunga, who penned a scathing letter accusing Kenyatta of being “garlanded in the pettiness of performing power” and betraying his official oath. But this is not the first time Kenyatta is butting heads with the judiciary which, especially since the promulgation of the constitution 11 years ago, has become much more assertive in demanding compliance with the law from the political class.

For much of Kenya’s history, judicial independence has been a myth. In colonial times, judges served at the pleasure of the Crown and lacked independence. As Mutunga observed in 2013, they were essentially “a civil service, beholden to the colonial administration and very rarely minded to stand up to it”.

Although at independence in 1963, the constitution protected judges, deliberately insulating them from executive power, it proved no match for the ingrained habits of judicial subservience to executive tyranny that had been bred and nurtured under colonialism.

Over the next 47 years, with a few notable exceptions, the courts were not just silent, but seemingly willing accomplices as successive presidents and their cronies demolished all constitutional safeguards and restraints. The judiciary became little more than a department in the attorney general’s office, grossly underfunded and understaffed.

In one prominent case in 1989, a judge declared the entire bill of rights inoperative and unenforceable, in essence stripping all Kenyans of their constitutional protections, because the chief justice had failed to set rules of procedure for its enforcement by the High Court.

Perhaps the lowest point for the judiciary came during the dispute over the 2007 presidential elections, when a lack of faith in its independence saw the opposition take its case to the streets, which resulted in the death of more than 1300 people, the displacement of hundreds of thousands and the near-collapse of the country. In the aftermath of the violence, an independent judiciary was a top priority for reformers, who had been battling for constitutional and judicial reform for more than 25 years.

In many ways, the 2010 constitution was a reset of the one promulgated at independence and undid many of the ruinous amendments the political class had inflicted on Kenyans. The independence constitution failed largely because it was imposed by the British, the political class that received it did not believe in it and, after nearly a century of colonial repression, there were few existing institutions that could defend it.

By contrast, the 2010 constitution was the product of decades of local struggle, wide national consultation and had an army of civil society activists, lawyers and ordinary Kenyans willing to stand up for it. Most importantly, freed from executive shackles, the judiciary is quickly evolving a backbone and asserting its role as the enforcer of constitutional rule.

It has not been a straightforward evolutionary march, though. Some of the judiciary’s interpretations of the constitution have seemed like throwbacks to the former days of kowtowing to Kenya’s rulers. Decisions in 2013 that essentially said the constitutional bar for integrity did not require people accused of crimes against humanity at the International Criminal Court to clear their names before running for the highest office in the land, and that subsequently upheld the dubious election of President Kenyatta and his deputy, William Ruto in a widely-panned judgement, made many Kenyans fear that the future could be a rerun of the past.

The courts have also controversially upheld colonial-era strictures against sexual diversity, inexplicably equating homosexual sex to marriage and suggesting that by acknowledging the right to marry someone of the opposite sex, the constitution was somehow forbidding same-sex relations.

However, in the main, the judiciary appears to have found some of its footing and earned a measure of confidence from Kenyans by, on numerous occasions, striking down legislation that violated the constitution and, in the run-up to the 2017 elections, upholding rules that would make cheating easier for citizens to detect.

Without a doubt, the high point came with the annulment of the presidential election that year, something that was previously unthinkable. That occasioned dire threats from Kenyatta to “revisit” and two months later, following an attack on the deputy chief justice, the Supreme Court could not muster a quorum to hear a case challenging the holding of a repeat election before the problems that had led to the annulment were fixed.

Despite “winning” his second term, Kenyatta has continued his war on the judiciary and on the constitution, teaming up with his erstwhile rival, Raila Odinga, to launch the Building Bridges Initiative – a thinly-disguised attempt to turn back the clock by amending the constitution to begin recreating an all-powerful executive. The initiative resulted in a bill that put forward several constitutional changes.

As in the 1960s, today the legislature has been effectively neutered as a check on the executive and it fell on the judiciary to stop the bill. In May, in another historic judgement, the High Court declared the enterprise unconstitutional.

In a ruling that rehashed the sorry history of how the independence constitution was mutilated using the amendment process and how Kenyans had to fight to undo it, the judges held that tampering with the basic structure of the constitution could only be done by a constitutional assembly that involved all Kenyans in drafting a new one.

Once again, the ruling has prompted anger and disappointment from Kenyatta and his acolytes and precipitated acts of retribution. Two of the judges whose elevation to the Court of Appeal he has blocked were part of the five-judge bench that delivered the ruling.

In a horrific speech at the beginning of June, the president declared that the purpose of human rights and autonomy was cooperation with the government and that the exercise of independence by the judiciary was a threat to the same constitution that granted the independence.

As the judiciary now prepares to hear the government’s appeal against the ruling at the end of June, the question remains whether the judges will once again be cowed into compliance with the wishes of the executive or whether they will summon the courage to continue their defence of the constitution and of their own independence. Kenyans will be keeping a wary eye out, hoping for the latter.