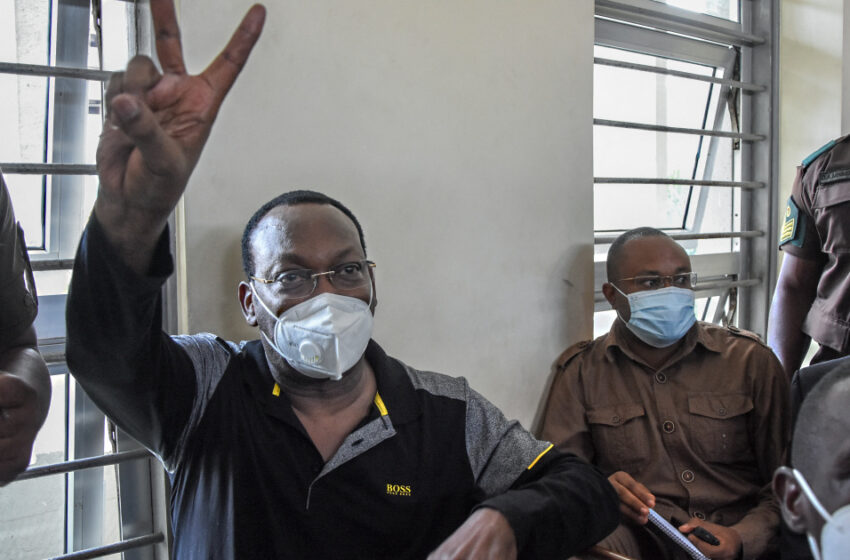 Freeman Mbowe says the charges are politically motivated, and his case has triggered concern among rights groups.

The leader of Tanzania’s main opposition party has appeared in court on “terrorism” charges that his supporters have denounced as a politically motivated move to silence dissent.

On Friday, it was the first time Freeman Mbowe was seen in public since his arrest along with other members of his Chadema party on July 21, just hours before they were to hold a public forum on constitutional reform.

Mbowe, 59, flashed the V-for-victory sign as he arrived at the court in Tanzania’s commercial capital Dar-es-Salaam, transported in a green van from the prison.

Security was tight and police prevented most opposition supporters from entering the court, with Chadema saying on Twitter that 11 members of the party were arrested when they turned up.

Mbowe has been charged with terrorism financing and conspiracy in a case that has triggered concern among rights groups and Western nations about the state of democracy under Tanzania’s new President Samia Suluhu Hassan.

The case against Mbowe and three other co-defendants was adjourned until August 13 as prosecutors want it to be handled by a higher court, prosecutor Pius Hilla said.

Defence lawyer Peter Kibatala said they had expected initial procedures to be completed at Friday’s session.

“I would urge they make it quick to protect rights of the accused and the fact that Mbowe’s case is of public interest. I hope we will move a step forward when we come to court next week so that hearing starts at the High Court,” he said.

Other opposition parties expressed solidarity with Mbowe, and urged Hassan to have the case dropped.

“Moments like this take Tanzania a step backwards … the president’s wisdom is needed so that we move forward,” said James Mbatia, leader of the NCCR-Mageuzi opposition party, and one of the few supporters allowed inside the courtroom.

A senior US government official on Wednesday expressed concern over Mbowe’s arrest.

“We have expressed our concern about the treatment and imprisonment of the opposition leader Mbowe,” Victoria Nuland, under-secretary for political affairs, told reporters.

Human rights group Amnesty International has asked the Tanzania government to “substantiate charges” against Mbowe or release him.

Mbowe will be kept in custody until the August 13 hearing.

‘No basis in law’

Mbowe was initially due to appear in court via video link from prison on Thursday, but the case was postponed to Friday because of connection problems, Kibatala said.

On Thursday, riot police had broken up a demonstration by his supporters who were waving banners “Mbowe is not a terrorist” and “Free Freeman Mbowe”, and Chadema said there were a number of arrests.

Kibatala said on Thursday the charges against Mbowe “have no basis in law”, describing them as “opportunistic and probably politically motivated”.

Chadema leaders say the arrests of Mbowe and his colleagues reflect a deepening slide into “dictatorship”.

“Freeman Mbowe, parliamentarian for 15 years, leader of the official opposition in parliament for 10 years and head of the largest legal opposition party for 17 years is not a terrorist,” Chadema’s deputy chairman Tundu Lissu said on Twitter.

Prosecutors say the terrorism charges against Mbowe do not relate to the constitutional reform forum Chadema had planned to hold in the northwestern port city of Mwanza last month, but to alleged offences last year in another part of Tanzania.