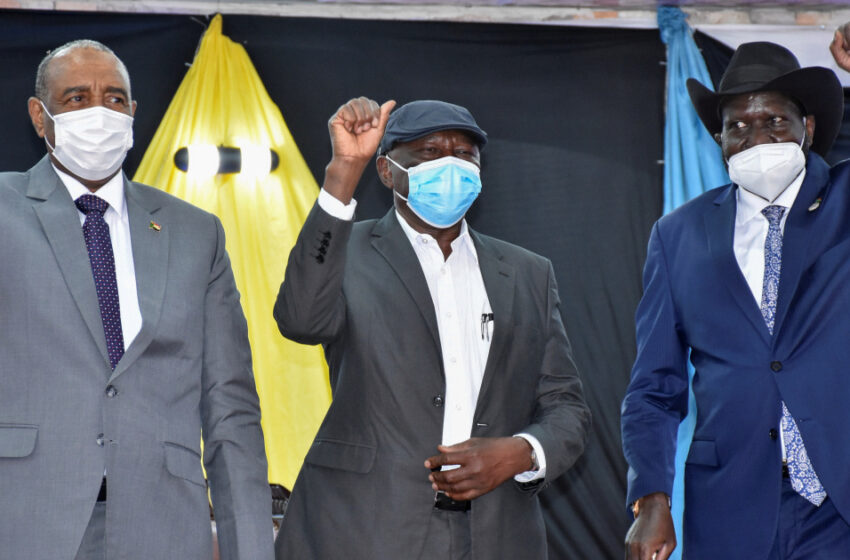 South Sudan President Salva Kiir is hosting talks between the Sudanese government and the SPLM-North.

Sudan’s transitional government and the main rebel group have kicked off a new round of peace talks, officials have said, the latest effort to end a decades-long conflict in the East African country.

Afterwards, delegations from the government and the rebel group were to continue their closed deliberations in Juba, South Sudan’s capital, according to the prime minister’s office.

Kiir urged both sides to “embrace the spirit of dialogue and let their attention shift to peace instead of thinking of war”.

“I believe that war will never save us. You have seen we [the South Sudanese] fought for 21 years up to 2005, with all of that we did not get what we wanted in full,” Kiir said.

Hundreds of Sudanese women, men and youths, mostly from the Nuba Mountains in South Kordofan – an area which has witnessed deadly clashes in recent years – sang songs of freedom as they gathered for the start of the talks.

“We affirm our commitment to a peaceful settlement and to the negotiations and mechanisms to resolve the root causes of the conflict in Sudan,” al-Hilu said.

Meanwhile, al-Burhan said his team “came to the negotiation this time around with an open heart and is determined to achieve peace for Sudan that complements what has started in the previous agreements”.

The United States special envoy for Sudan and South Sudan, Donald Booth, said the two sides should demonstrate “the political will to build on the momentum on the declaration of principles to reach a peace agreement in a near future”.

The talks come less than two months after the government and the rebel group signed a declaration of principles detailing a road map for the talks.

Al-Hilu’s movement is Sudan’s single largest rebel group and is active in the Blue Nile and South Kordofan provinces, where it controls significant chunks of territory.

Sudan’s transitional government has been engaging in peace talks with rebel groups over the past two years.

It is looking to stabilise the country and help its fragile path to democracy survive following the military’s overthrow of longtime ruler Omar al-Bashir in April 2019.

In 2020, Sudan’s transitional authorities and another rebel alliance signed a peace deal.

Al-Hilu’s group participated in negotiations leading up to that agreement but did not sign the final deal.

It called for a secular state with no role for religion in lawmaking, the disbanding of all of al-Bashir’s militias and the revamping of the country’s military.

Al-Hilu’s group says if its demands are not met, it will call for self-determination in areas it controls.

Another main rebel group, the Sudan Liberation Movement-Army, led by Abdel-Wahid Nour, rejects the transitional government and has not taken part in talks.