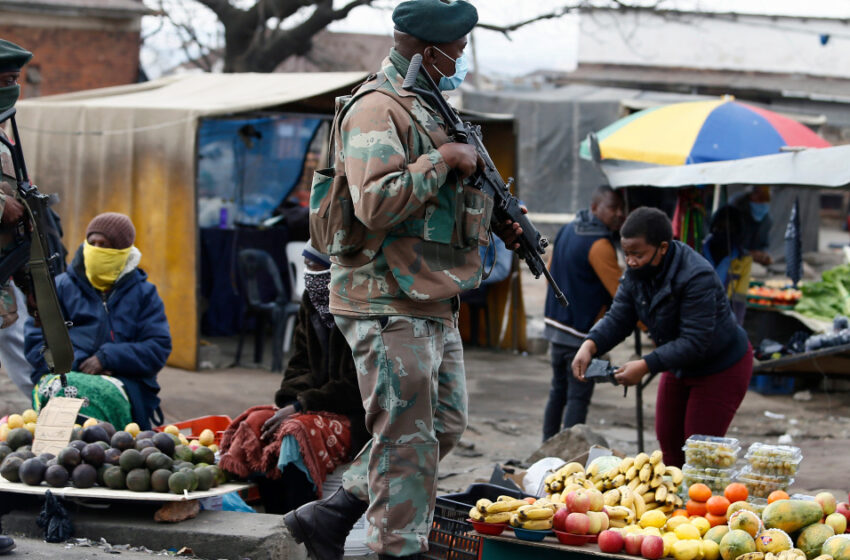 South Africa has begun deploying more than 20,000 troops to assist police in quelling week-long unrest, as the death toll soared to 117 people in the rioting and looting following the jailing of former President Jacob Zuma, authorities said on Thursday.

In one of the largest deployments of soldiers since the end of white minority rule in 1994, the government said 10,000 soldiers were on the streets by Thursday morning and the South African National Defence Force has also called up all of its reserve force of 12,000 troops.

In a show of force, a convoy of more than a dozen armoured personnel carriers brought soldiers on Thursday into Gauteng province, South Africa’s most populous, which includes the largest city, Johannesburg, and the executive capital, Pretoria.

Buses, trucks, aeroplanes and helicopters were also being used to move the large deployment of troops to trouble spots in Gauteng and KwaZulu-Natal province that have seen a week of violence in mainly poor areas.

The unrest, which began last Friday, was triggered by the jailing of former President Zuma but widened into grievances over inequality and poverty.

More than 2,200 people have been arrested, the acting minister in the presidency, Khumbudzo Ntshavheni, told a news conference, adding that Johannesburg was now “relatively calm”.

But in KwaZulu-Natal province, the epicentre of the violence, the minister said the “situation remains volatile, but much improved and moving towards stability”.

About 100 acts of violence had been recorded on Wednesday, but fewer than three dozen on Thursday, she said.

The violence has so far not spread to South Africa’s seven other provinces, where police are on alert.

Progress Update: Arrests have been made. Arrests continue to be made. Justice will be served.#ProtectSouthAfrica pic.twitter.com/KRALbBUF7X

Al Jazeera’s Bernard Smith reporting from Johannesburg said it was “much calmer” in the country’s economic hub.

“Members of the [Johannesburg] community are going with the army door-to-door finding people who have been looting from the shops and getting them to give stuff back,” he added.

Meanwhile, in Durban in KwaZulu-Natal province, where there has been much more violence, there are fears that the situation could get worse, Smith said.

“There are already queues outside supermarkets where people are panic buying, and where a refinery was forced to stop operating because … workers couldn’t get to the refinery. And so that has prompted panic buying a fuel hand in the supermarkets.”

The unrest has also disrupted hospitals struggling to cope with a third wave of COVID-19. They say they are running out of oxygen and drugs, most of which are imported through Durban.

Some vaccination centres have been forced to shut.

President Cyril Ramaphosa told leaders of political parties that parts of the country “may soon be running short of basic provisions” following disruption to supply chains.

Security forces increased their presence in the Durban suburb of Phoenix, where the riots caused racial tensions to flare.

The predominantly Indian residents of Phoenix had been patrolling their area against the unrest and are accused of shooting Black people suspected of being rioters.

“Lives have been lost. The communities have a standoff and are in a bad way because it is the Indian community and the neighbouring communities, who are African,” Minister of Police Bheki Cele told a news conference on Thursday in Phoenix, where he said 15 people had been killed.

Cele had earlier said that about 12 people were being investigated for inciting and planning the unrest.

“The Indian nation here in KZN is the second largest outside of India,” the new Zulu king, Misizulu Zulu, said in an appeal to his community on Wednesday.

“We have lived in peace for many years alongside them. Therefore I ask: Let us be understanding and thoughtful towards each other.”

Zuma, 79, was sentenced last month for defying an order to give evidence at a judicial inquiry probing high-level corruption during his time in office from 2009 to 2018.

He has pleaded not guilty in a separate case on charges including corruption, fraud, racketeering and money laundering.

He says he is the victim of a witch-hunt by his political foes.

Zuma’s fall from grace has opened up a power struggle within the African National Congress (ANC), which has ruled since the end of apartheid in 1994.

The former president’s loyalists make up the strongest faction opposed to President Ramaphosa.