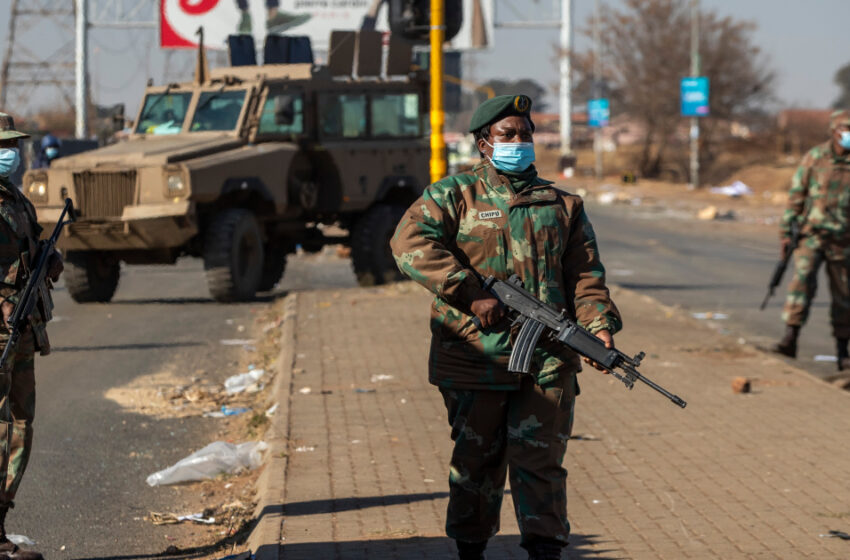 South Africa mustered its army reserves in a bid to quell several days of looting that has ravaged supplies of food and other essentials and dealt a crippling blow to its economy.

The disorder slowly began to ebb across most affected provinces on Thursday before an expected surge in soldiers on the streets.

“All reserve members are to report for duty at first light tomorrow morning 15 July 2021 at their respective units,” army chief Lieutenant-General Lawrence Mbatha said in orders issued overnight as the unrest entered its sixth day.

Soldiers should “report ready with their necessary equipment”, the Ministry of Defence said in a statement.

The soldiers were expected in the hotspots of KwaZulu-Natal and Gauteng provinces, where the police and the army have been battling the disorder for days.

On Wednesday, the government said it would request the deployment of about 25,000 soldiers to tackle the emergency – 10 times the number that it initially deployed.

The unrest, which began last Friday, was triggered by the jailing of former President Jacob Zuma but widened into grievances over inequality and poverty.

Stores and warehouses have been ransacked and torched around the economic capital of Johannesburg and in the southeastern state of KwaZulu-Natal.

The disruption has severed supply chains and choked transport links, savaging deliveries of food, fuel, medicine and other essentials.

According to official figures, 72 people have died and more than 1,200 have been arrested, while South Africa’s consumer goods regulatory body estimates that more than 800 shops have been plundered.

Though arson and looting ebbed on Thursday, pockets of looting continued in the eastern port city of Durban.

A Reuters news agency reporter saw crowds in Durban’s Mobeni neighbourhood rolling away trolleys loaded with maize meal and other looted staples. Some loaded pick-up trucks – one such truck had to be abandoned as it had run out of fuel. Petrol stations have shut across the city because of the unrest.

Al Jazeera’s Haru Mutasa, reporting from Johannesburg, said the situation in the city was relatively calm on Thursday and that people from the community were helping shop owners who lost their belongings during the protests.

“They have been cleaning up the streets, helping shop owners remove what’s been damaged, and trying to set things up again so they can start running smoothly.”

Mutasa said army personnel have been deployed outside shopping malls and businesses in Johannesburg to prevent any further looting.

The unrest began a day after former president Zuma began a 15-month jail term on July 8 for refusing to testify to a commission probing corruption under his tenure.

Protests against the jailing of Zuma quickly turned into looting as crowds pillaged shopping malls, hauling away goods as police stood by, seemingly powerless to act.

According to Mutasa, the protests quickly grew and became about “inequality and poverty” in South Africa.

As the crisis escalated, the armed forces on Monday said they were sending 2,500 soldiers to help restore order.

The figure was criticised by many as paltry, given that 70,000 soldiers were deployed last year to enforce a strict coronavirus lockdown.

On Wednesday, Defence Minister Nosiviwe Mapisa-Nqakula told Parliament she had submitted a request for “plus or minus” 25,000 soldiers. The president must confirm such a request.

The request came after President Cyril Ramaphosa told leaders of political parties that parts of the country “may soon be running short of basic provisions” following disruption to supply chains.

TV footage of the casual looting has deeply shocked many South Africans. Business confidence has been savaged at a time when the economy is already mired in unemployment, especially among young people.

Locals have started forming vigilante groups to protect infrastructure in their neighbourhoods.

A group of commuter minibus operators armed themselves with sticks and firearms on Wednesday and violently beat up suspected looters in the Johannesburg township of Vosloorus.