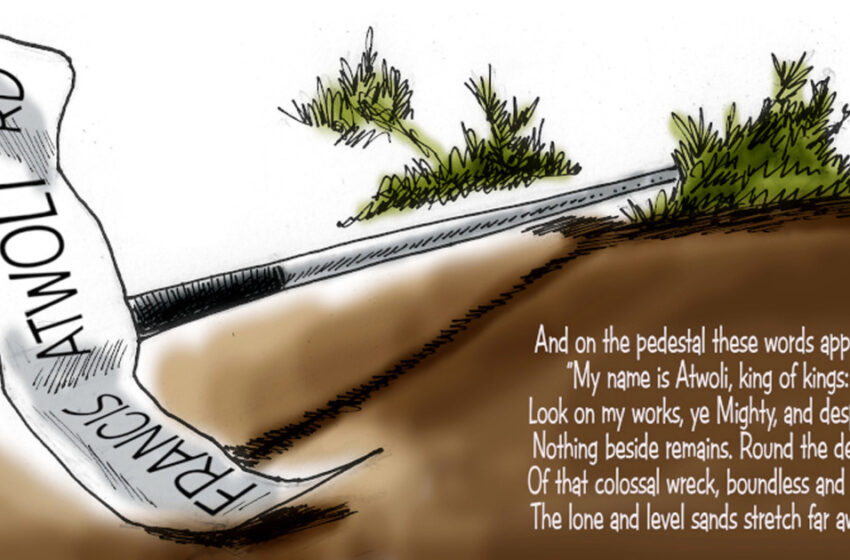 Francis Atwoli is a man of means. Fabulously rich, the pugnacious 72-year-old has been at the helm of the Central Organization of Trade Unions for two decades, somewhat ironically representing more than 2.5 million of Kenya’s poorly paid workers. Under his watch, the labour movement has been completely neutered as a political force, and he is more notable for his annual pleas to the government for a rise in the minimum wage every Labour Day than for actually working to improve their lot as he has his own. His Wikipedia page describes him striding the political landscape “like a colossus” and says his “chief achievement was getting a street named after him in May 2021”.

However, that “achievement” has thrust him and his well-heeled neighbours into the heart of a controversy over memory and ownership of the Kenyan capital, Nairobi, that has been raging ever since it was established, well over a century ago. The decision by Acting Governor Anne Kananu to name the road after her “good friend and brother … in recognition of his selfless contribution and agitating for the rights of Kenyan workers in the last 54 years” has sparked outrage in many quarters and ignited a mini-war over a signpost.

In the last few weeks, the signpost erected by her government to mark Francis Atwoli Road (formerly Dik Dik Road) has been vandalised several times, always being replaced a few days later. Internationally renowned activist Boniface Mwangi has vowed to pull it down and has been promised legal representation by prominent senior lawyers should he be prosecuted.

For his part, Atwoli has been defiant, condemning the vandals and boasting on Twitter that his name would “live in posterity”. He said the authorities would install a CCTV camera to protect the sign and now a group of young men has upgraded the sign and declared that it will provide the sign with 24-hour security.

Nairobians are no strangers to having their roads named after the high and mighty. And the names have always signified which groups are in power and which are excluded. While in its early years, the city’s roads had numerical naming, by the mid-1920s these were increasingly replaced by British and Indian names, the top groups in the racist hierarchy the British had created.

The streets bore the monikers of British settler farmers and colonial officials, as well as prominent Indian business and religious leaders. As Melissa Wanjiru-Mwita and Kosuke Matsubara observe in their paper detailing the history of Nairobi’s street toponymy, by 1936, “the marginalisation of Africans was apparent in the street naming since no street in the central area was given an African name”.

This underscored the fact that Nairobi was not meant for Africans. The colonial government provided little in the way of housing and public services for them. Even though Africans were the largest population group in the segregated city, Wanjiru-Mwita later notes that “the ‘African native’ was [considered] a temporary resident of the city. Africans could only live in the city as registered labourers.”

At independence in 1963, “Africanisation” of the city, and of the inherited colonial apparatus, was the priority. Nairobi streets would again be the stage where dominance would be asserted. Initially done haphazardly, it was not until 1972 when a policy for renaming streets was laid down.

Across the city, the new naming regime not only signified the marginalisation of the whites and Indians, but also reflected the ethnicised politics of the day and the dominance of the Kikuyu ethnic group and celebrated the new African elite across the continent. With the exception of heads of state, death was generally a requirement for one to have a road named after them.

In general, things seem to go smoothly when the rules are stuck to. For example, there was little controversy when Mugumo road was renamed to honour President Uhuru Kenyatta’s elder sister, Margaret Wambui Kenyatta, who was mayor of Nairobi from 1970 to 1976, following her death in 2017. This was despite her bloodstained record in the ivory trade which brought Kenya’s elephants to the brink of extinction.

However, in 2014, Nairobi’s first governor, Evans Kidero, was forced to retreat and pull down his own road sign after suffering much the same blowback as Atwoli for naming a road after himself. An attempt the following year by politicians in the Nairobi county assembly to pass a law to have their names on streets also appears to have been quietly dropped.

Despite the pretensions at Africanisation, Nairobi is still, at heart, a colonial town that deeply resents the influx of poor Africans into its centre. The city’s DNA continues to be anti-poor and anti-African.

The furore over Atwoli’s road has coincided with yet another chaotic attempt by city authorities to “decongest” the city by evicting the public transport vehicles, commonly referred to as matatus, that many Nairobians rely on to move around. A few years ago, a similar proposal to ban private vehicles from the central business district, a preserve of a small wealthy elite, was floated, but was given short shrift.

Just as when the British ran the city, the vast majority of Nairobi’s population is still housed in slums that receive few public services. While most people walk to work, the authorities prefer to build roads for the rich rather than walkways.

The fight over the naming of roads can be seen as part of the continuing struggle to truly convert Nairobi into an African city. That is, a city that works for the majority of its residents rather than for just a few of them; one that reflects the aspirations of the many rather than functioning as a laundry for elite reputations.

Even when it produces perverse outcomes, as when wildlife poachers get their names on the roads, the push to force city fathers to abide by a rules-based system is still very much about taming the arbitrary exercise of power to decide who is in and who is out.