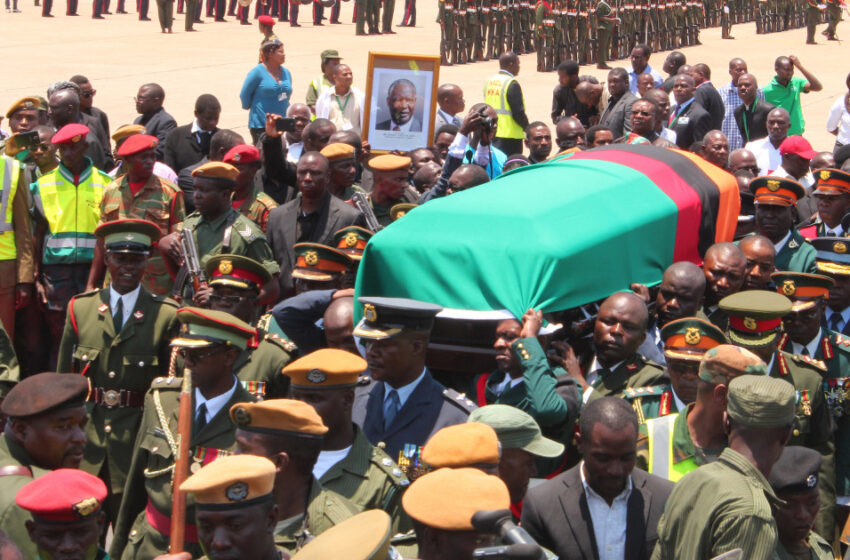 Mourners in Zambia’s capital, Lusaka, have gathered at a stadium for a state memorial service for Kenneth Kaunda, the nation’s founding president and supporter of African nationalism.

A number of leaders from across the continent also attended Friday’s service for Zambia’s former president, who died last month aged 97.

A coffin draped in the Zambian flag was driven on a gun carriage into the 60,000-capacity National Heroes Stadium and placed under a white marquee.

Complying with COVID-19 social distancing rules, attendees waved white handkerchiefs as they stood on the terraces, dancing to dirges and solemn music played by a military band.

A hero of the struggle against white rule in southern Africa, Kaunda died on June 17 at a military hospital where he had been admitted with pneumonia.

He always carried a white handkerchief – an item that he said symbolised love and peace, and which he started carrying while imprisoned during the struggle for independence.

Kaunda, popularly known by his initials of KK, was president of Zambia for 27 years, taking the helm after the country gained independence in October 1964.

He headed the main nationalist group, the left-of-centre United National Independence Party and hosted many of the movements fighting for independence or Black equality in other countries around the continent – sometimes at a heavy cost.

But his popularity at home waned as he became increasingly authoritarian and banned all opposition parties.

He eventually ceded power in the first multi-party elections in 1991, losing to trade unionist Fredrick Chiluba.

Zambia declared a period of mourning after his death, with flags flown at half-mast, while his body was taken around the country for the public to pay their respects.

He will be buried next Wednesday at the country’s presidential burial site situated opposite the cabinet office in Lusaka.

Some taxi drivers in the capital drove with their headlamps on as a way of mourning the founding leader.