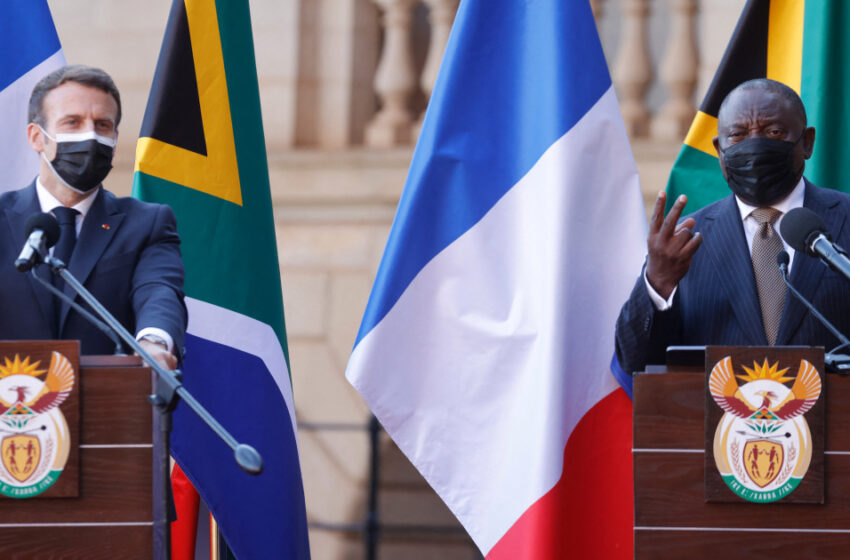 French president also pledged to donate more than 30 million vaccine doses by the end of the year to the UN-backed COVAX.

President Emmanuel Macron has said France will invest in boosting the production of COVID-19 vaccines in Africa, to help close a gap in the availability of the shots between African and Western nations.

Speaking at a joint news conference with South African President Cyril Ramaphosa in Pretoria on Friday, Macron said Africa made up about 20 percent of the world’s need for vaccines but only one percent of vaccine production.

“Trying to lift the hurdles in order to allow vaccine production in South Africa and all of Africa, we are in favour of that,” Macron said.

“But what is the problem we are trying to overcome? What we need to do is vaccinate as soon as possible, as many people as possible. It is a matter of duty and solidarity,” he said.

“The more time it takes, the more the virus is likely to mutate and to come back,” Macron said, adding that richer countries should provide any excess doses they have to poorer countries as quickly as possible.

He pledged that France will donate more than 30 million vaccine doses by the end of the year to the United Nations-backed COVAX global vaccine initiative.

He reiterated support for waiving intellectual property rights for COVID-19 vaccines, a move also supported by US President Joe Biden but opposed by Germany.

Sub-Saharan Africa has lagged behind the rest of the world with vaccination – less than two percent of its population has been immunised six months after the campaign started.

Ramaphosa this month sounded the alarm about what he called “vaccine apartheid” between rich countries and poor ones.

Pharma companies oppose the waiver, saying it could sap incentives for future research and development.

They also point out that manufacturing a vaccine requires know-how and technical resources – something that cannot be acquired at the flip of a switch.

Macron’s approach is to push for a transfer of technology to enable production sites in poorer countries.

The industry “is highly concentrated in the United States, Europe, Asia and a little bit in Latin America,” a Macron aide said. “Africa today produces very few anti-COVID productions and most notably no vaccine at the present time.”

South Africa is the continent’s most industrialised economy but also its worst hit by COVID, according to official statistics.

The country has recorded more than 1.6 million cases of Africa’s 4.7 million infections and accounts for more than 40 percent of its nearly 130,000 fatalities.