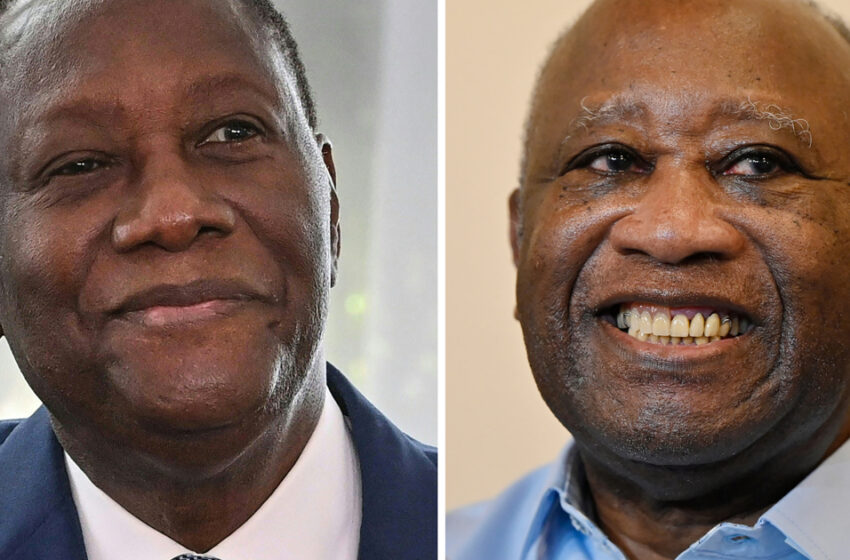 Ivory Coast’s President Alassane Ouattara is due to meet his predecessor, Laurent Gbagbo, for the first time since forces loyal to them fought a bloody post-election conflict 10 years ago.

The 76-year-old, who was elected president in 2000, rejected defeat by Ouattara in a 2010 presidential ballot. More than 3,000 people were killed in the months of fighting that ensued between forces loyal to the two men, before Gbagbo’s arrest in April 2011 and subsequent transfer to the ICC to face charges of crimes against humanity, of which he was eventually acquitted.

Observers will be scrutinising Tuesday’s meeting for signs of whether the two former rivals have buried the hatchet, boosting hopes for national reconciliation.

But Gbagbo’s spokesman Justin Katinan Kone urged the public “not to make too much” of the meeting, which will take place at the presidential palace.

“This is a courtesy visit to his elder … If it helps to ease the political atmosphere, so much the better,” he said.

“Laurent Gbagbo is in a spirit of openness, dialogue and reconciliation,” Franck Anderson Kouassi, a spokesman for Gbagbo’s Ivorian Popular Front (FPI) party, told the AFP news agency on Monday.

“Meeting President Ouattara is exactly in line with our way of thinking.”

“Dialogue in our country … will continue, because that is the government’s will,” said government spokesman Amadou Coulibaly.

Ouattara, 79, won a landslide victory in the last elections on October 31, in a vote, however, that was undermined by an opposition boycott.

In the run-up to the polls, dozens of people died in clashes with police after Ouattara unveiled his controversial bid for a third term.

Because of the unrest, Ouattara has officially welcomed Gbagbo’s return, hoping it will ease tensions.

But the question is whether Gbagbo will stick to the script of statesman or prefer an active political role that may challenge Ouattara.

Gbagbo rose in the 1970s as a left-wing campaigner who helped end Ivory Coast’s one-party system following independence from France in 1960.

His years in power were marked by rebellion, civil war, national divisions and repeatedly postponed elections but he retains considerable grassroots support. His defenders portray him as a champion of the poor and oppressed.

Analyst Rodrigue Kone said the long-expected encounter “won’t wipe out their huge differences but it takes their relationship further along”.

Ouattara’s side, he suggested, “sees the meeting as a recognition by Gbagbo of Ouattara’s legitimacy – something that hasn’t been conveyed before in such a visible and official manner.

In April, Ouattara said Gbagbo was free to return to Ivory Coast. He did not specify whether Gbagbo had been pardoned from an outstanding 20-year prison sentence given in absentia by an Ivorian court for misappropriating funds from the regional central bank.

Authorities have hinted that this sentence will be lifted.

Earlier this year, Gbagbo’s FPI fielded candidates in parliamentary elections for the first time in 10 years. Its contenders ran on a joint list with Henri Konan Bedie’s Democratic Party for Ivory Coast, who backed Ouattara in elections in 2010 and again in 2015.

Analysts are also watching the interplay among Ouattara, Gbagbo and Bedie, the three men who have dominated the political stage for decades.

On July 11, Gbagbo and Bedie – who were also once rivals – announced that they were united in the goal of forging “final and sustainable peace”.