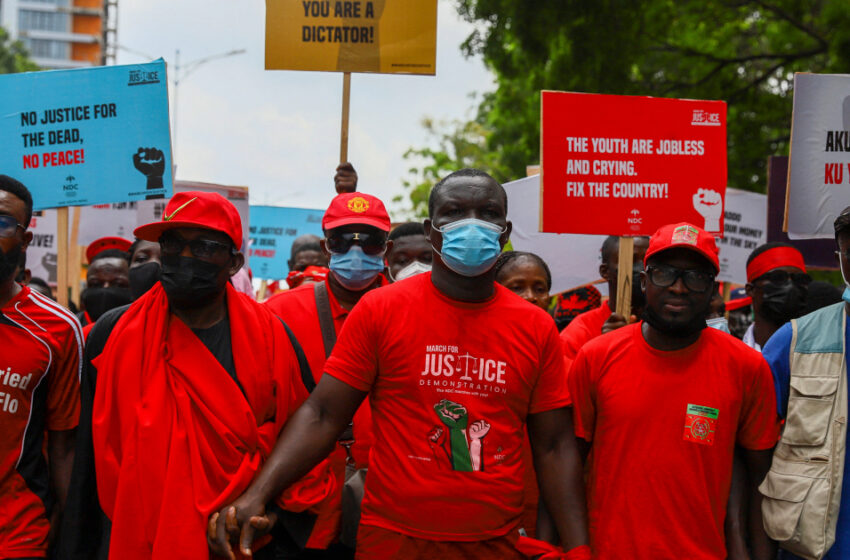 Hundreds of opposition supporters marched through the streets of Ghana’s capital Accra demonstrating against what they described as rising insecurity and lawlessness since President Nana Akufo-Addo came to power in 2017.

Wearing mostly red or black, the youth wing of the National Democratic Congress (NDC) danced through the streets on Tuesday with signs such as “You tweeted for George Floyd … Ghanaians have died, speak up!”.

Accompanied by the honking of motorcycle horns and music blasting from pick-up trucks, the group delivered a petition to the offices of the president and speaker of parliament.

“Thank you to the Youth of Ghana for turning up and having a peaceful protest,” George Opare Addo, the National Youth Organizer for the NDC, posted on Twitter.

“May the powers that be see reason in our protest and act accordingly.”

What a day! Thank you to the Youth of Ghana for turning up and having a peaceful protest. May the powers that be see reason in our protest and act accordingly. More pictures will come up! #MarchForJustice #YouthPower pic.twitter.com/fUoynwkCkn

The marchers pointed to a string of high-profile murders across the country.

“The recent killings in the city have put fear in us. We are afraid to go out at night for fear of being killed,” said Kingsley Boateng, a 40-year-old mechanic, according to Reuters news agency.

Two protesters were shot dead and four wounded in clashes with security forces in the southern region of Ashanti last month, in rallies over the death of youth activist Ibrahim “Kaaka” Mohammed.

“The police is filled with tyrants and vigilante groups,” Alisu Ibrahim, a protest organiser said, according to AFP news agency.

“They have been killing our people. That is why we are demonstrating.”

Akufo-Addo won a second term in December following a heated election that was marred by violence in which at least five people were killed, a rarity in a country that has a reputation as one of West Africa’s most stable democracies.

“Those crusading for the country to be fixed have become enemies of your government as they are either being intimidated, harassed or killed,” the petition said.

Among its demands, the NDC said the president should “de-politicise the security services introducing reforms to give true meaning to [their] independence”.