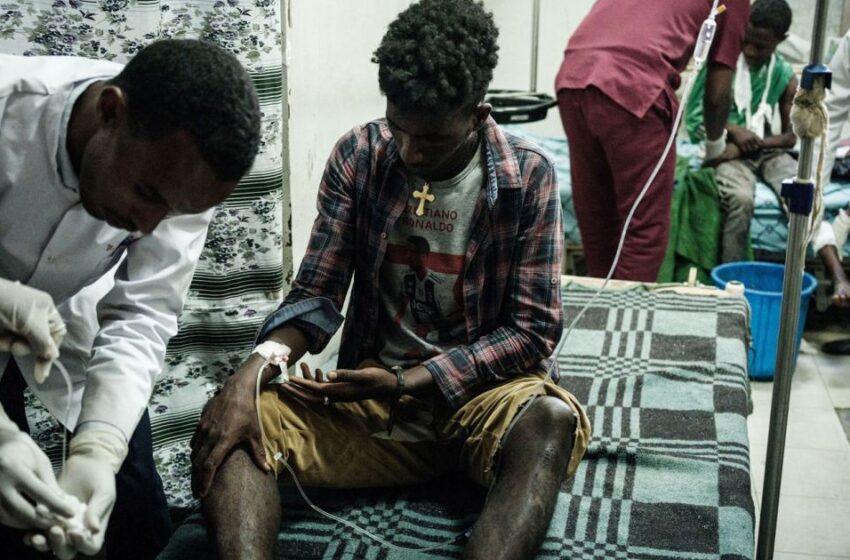 Ethiopia’s military has rejected accounts that dozens of civilians were killed in an air raid in the country’s embattled Tigray region, saying its forces had only struck rebels.

Local residents and medics quoted by multiple news outlets said this week dozens of innocent people were killed in the aerial attack on a busy market in the town of Togoga on Tuesday.

“We do not accept that this operation targeted civilians,” he said, cautioning that the rebels were known to wear civilian clothes.

Reporting from the capital, Addis Ababa, Al Jazeera’s Mohamed Adow quoted Getnet as saying that the TPLF fighters had gathered to commemorate Martyrs’ Day when the air raid occurred.

“He said they had intelligence and attacked a ceremony which was attended by many fighters who were commemorating the massacre that happened in 1988 which was carried out by the Derg regime at the time against Tigray rebels,” Adow said.

Survivors and health workers, however, described aerial explosions striking the marketplace at the peak of trading, killing and wounding dozens, including children. A local health official cited by AFP news agency put the death toll to at least 64, with 180 wounded, while medics told news agencies that the Ethiopian military was blocking ambulances from reaching the scene.

The Ethiopian military, aided by Eritrean troops, has been battling forces loyal to the TPLF for nearly eight months.

The conflict has killed thousands of people, if not more, and displaced two million, triggering an immense humanitarian crisis. Last week, the United Nations warned that 350,000 people in Tigray are facing famine conditions, with another two million “just a step away”.

Asked about children wounded in Tuesday’s attack, Getnet said the TPLF uses propaganda and is known for faking injuries. He also said the doctors quoted by the media are not “real doctors”.

The remarks were the first acknowledgement by the military of the air raid, which came after residents said new fighting had flared in recent days north of Tigray’s regional capital, Mekelle.

The UN has called for an urgent investigation into the attack and said it was “deeply disturbed” by reports the army had blocked evacuations.

The United States also said it was “gravely concerned” by the reported deaths and called for an urgent investigation.

European Union foreign policy chief Josep Borrell said if confirmed, the blocking of ambulances could amount to a violation of international law.

This bombing “adds to the appalling series of violations of international humanitarian law and human rights” in Tigray, he said.

The attack came as vote counting was under way after Ethiopia’s delayed elections on Monday. However, the conflict in Tigray meant no vote was held there, while security concerns and problems with ballot papers also delayed voting in two other regions.

The TPLF, which dominated national politics for decades until Abiy came to power in 2018, said federal forces and its longtime foe Eritrea launched a “coordinated attack” against it.

Abiy, the winner of the 2019 Nobel Peace Prize, declared victory in late November after the army entered Mekelle. Fighting, however, is still ongoing and reports of massacres, rape and widespread hunger keep emerging.

On Monday, Abiy denied there is hunger in Tigray, telling the BBC that “there is a problem and the government is capable of fixing that”.

Alex de Waal, executive director of the World Peace Foundation, warned the humanitarian situation in Tigray has continued to deteriorate and the international community cannot afford to wait to take action.

“The reality on the ground indisputably is that famine exists,” he told Al Jazeera. “The government of Ethiopia and Eritrea, between them, have been trying systematically to start to break Tigray into submission. And that is what has created the famine, and they appear determined to continue with that policy,” he said.

In recent days, following Monday’s elections, there were reports of rebel advances in Tigray. They included the brief occupation of the key town of Adigrat in the far north, and Wukro, further south nearer Mekelle, residents told AFP.

“But the facts on the ground, as they change, as the Ethiopian army is forced into retreat, as it is possible for journalists to go into the areas that are controlled by the Tigray defence forces, we’re going to see a very, very disturbing picture that I hope will galvanise international humanitarian action on the scale that is needed.”