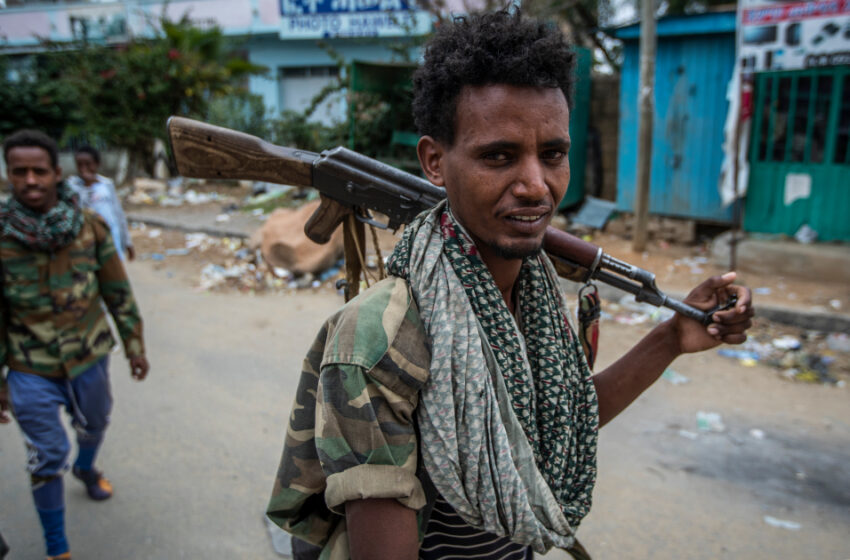 The Oromo Liberation Army said it has struck a military alliance with the Tigray forces and the aim is to ‘overthrow this government militarily.’

The leader of an armed group that Ethiopia’s government designates a terrorist organisation says his group has struck a military alliance with the Tigray forces now pressing towards the capital.

Wednesday’s development came as the conflict that erupted in the Tigray region last year spreads into other parts of Africa’s second-most populous country.

“The only solution now is overthrowing this government militarily, speaking the language they want to be spoken to,” Oromo Liberation Army leader Kumsa Diriba, also known as Jaal Marroo, told The Associated Press in an interview on Wednesday.

He said the agreement, proposed by the Tigray forces, was reached weeks ago.

“We have agreed on a level of understanding to cooperate against the same enemy, especially in military cooperation,” he said. “It is under way.”

They share battlefield information and fight in parallel, he said, and while they are not fighting side by side, “there is a possibility it might happen.”

Talks are under way on a political alliance as well, he said, and asserted that other groups in Ethiopia are involved in similar discussions, “There’s going to be a grand coalition against [Prime Minister Abiy Ahmed’s] regime.”

The alliance brings together the Tigray People’s Liberation Front, which long dominated Ethiopia’s government but was sidelined when Abiy took office in 2018, and the OLA, which last year broke away from the opposition party Oromo Liberation Front and seeks self-determination for the Oromo people.

Ethiopia’s government earlier this year declared both the TPLF and OLA as terrorist organisations.

There was no immediate comment from General Tsadkan Gebretensae with the Tigray forces, nor from the spokeswoman for Abiy’s office.

The OLA leader spoke a day after the prime minister called on all capable Ethiopians to join the military and stop the Tigray forces.

“Now is the right time for all capable Ethiopians who are of age to join the Defence Forces, Special Forces and militias and show your patriotism,” Abiy’s office said in a statement.

Tigray forces spokesman Getachew Reda has told the AP they are fighting to secure their long-blockaded region but if Abiy’s government topples, “that’s icing on the cake.”

With access to parts of Ethiopia increasingly restricted and journalists often harassed, it is difficult to tell how citizens will respond to the prime minister’s call, or whether they will join the fight against him.

The Tigray leaders embittered many Ethiopians during their nearly 30 years in power by putting in place a system of federalism that led to tensions that continue to simmer in the country of 110 million people.

The OLA leader acknowledged that agreeing to the TPLF’s proposal for an alliance took some thought.

“There were so many atrocities committed” against the Oromo people during the TPLF’s time in power, he said, and the problems it created have never been resolved.

But the OLA decided it was possible to work with the TPLF, he said, though some doubts remain.

“I hope the TPLF has learned a lesson,” he said.

“I don’t think the TPLF will commit the same mistakes unless they’re out of their mind.” If they do, there will be chaos in Ethiopia and it could collapse as a state, he said.