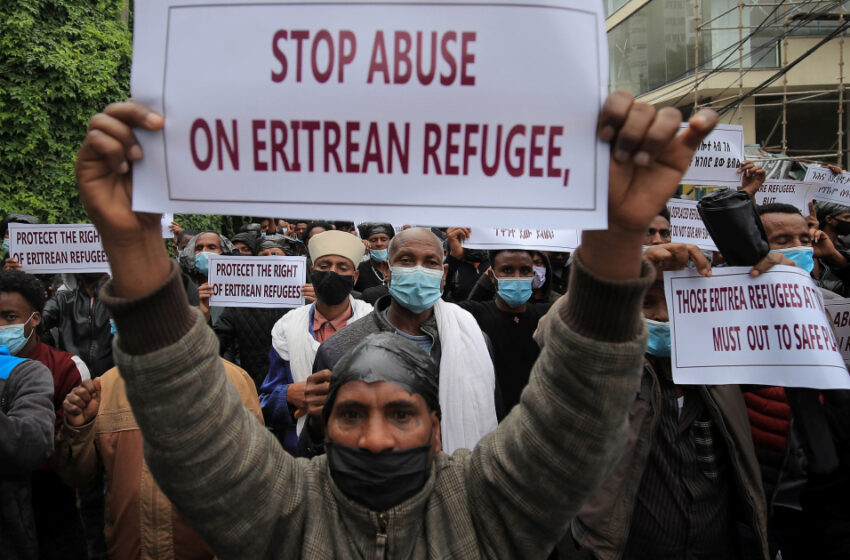 Addis Ababa, Ethiopia – Eritrean refugees have organised a protest in front of the UN refugee agency (UNHCR) office in the capital, Addis Ababa, demanding the relocation of thousands of refugees from camps in the war-torn Tigray region.

About 300 protesters on Thursday blocked a road that led to the UNHCR office, holding signs that said “Stop abuse of Eritrean refugees” and “Protect the rights of refugees.”

They also demanded basic humanitarian assistance from the UN agency and its Ethiopian counterpart – Agency for Refugees and Returnees Affairs (ARRA) – for thousands of refugees who have escaped the warzone to Ethiopia.

“We want the world to know that Eritrean refugees are suffering in Ethiopia,” Mitku Digaffe, one of the organisers of the rally, told Al Jazeera. “We feel neglected and forgotten.”

Many of the protesters were from the refugee camps of Hitsats and Shimbella, which housed more than 30,000 refugees, but were shut down in February after being attacked in the wake of an armed rebellion in Ethiopia’s Tigray region.

Thousands of Eritrean refugees have been displaced due to the rebellion since January, with many moving to the two surviving camps in Tigray, Mai Aini and Adi Harush, while others opted to return to their home country, Eritrea.

Protesters at the rally Al Jazeera spoke to said mass atrocities of looting, killing, and sexual assaults have been committed against refugees in camps of Hitsats and Shimbella under the control of the rebel Tigryan Defence Force (TDF).

“My mother was killed by Tigray militia when we were fleeing the camp,” Anbesa Wubaselassie, 25, told Al Jazeera through a translator.

“There was a day we buried 10 refugees in one day who were shot,” another protester, Mitiku, who fled from the Hitsats camp, said.

In total, more than a million people have been displaced in Tigray since November 2020, when the government of Prime Miniter Abiy Ahmed deployed federal forces to the region after accusing the Tigrayan leaders of attacking an army base.

Both sides have been accused of committing atrocities while thousands have been killed in the worst conflict since Abiy took over as prime minister in 2018.

Within weeks of launching the war in November, Abiy declared victory when government forces captured the Tigray capital, Mekelle.

But last month, the TDF forces retook the capital city and launched a new offensive intended to regain control of western and southern Tigray, drawing in other regions, including Oromia – Ethiopia’s largest region.

Concerns are now growing about the safety and wellbeing of thousands of Eritrean refugees in the two remaining camps in Mai Aini and Adi Harush as fresh fighting erupted last month.

The UN refugee agency said that aid agencies have been unable to access the two camps currently under the control of the TDF since July 14.

The UNHCR said this week that conditions for the refugees in Tigray have become increasingly dire, with about 24,000 Eritrean refugees trapped in the two camps in Tigray.

In a statement released last week, ARRA stated that it is working to establish a new camp in the neighbouring Amahara region’s North Gondar Zone for refugees escaping the conflict areas. However, the situation is deteriorating and continues to be a matter of grave concern, the statement said.

While the fate of those refugees who remain in Tigray remains unknown, those who escaped are still finding it hard to survive.

The UN has said the war would affect about 55,000 Eritrean refugees sheltered in the Afar region that borders Tigray.

“We no longer feel safe here. The war and its trauma have made Ethiopia no longer a safe place for Eritrean refugees. We want to be relocated to a different country,” said Anbesa.