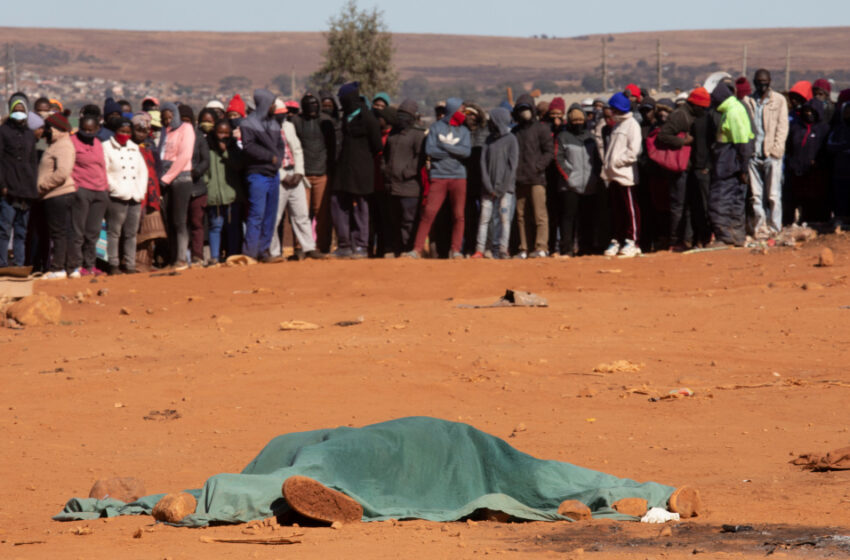 Crowds clashed with police and ransacked or burned shopping malls across South Africa on Tuesday with dozens reported killed as grievances unleashed by the jailing of former President Jacob Zuma boiled over into the worst violence in decades.

Protests that followed Zuma’s arrest last week have widened into an outpouring of anger over the inequality that remains 27 years after the end of apartheid.

Poverty has been exacerbated by severe social and economic restrictions aimed at curbing the spread of COVID-19.

Unemployment stood at a new record high of 32.6 percent in the first three months of 2021.

Security officials said the government was working to bring an end to the violence and looting, which has spread from Zuma’s home province of KwaZulu-Natal to Johannesburg, the country’s biggest city, and its surrounding province of Gauteng.

The South African Police Service (SAPS) said late on Tuesday that as many as 72 people had lost their lives and 1,234 had been arrested over the last few days as protests descended into looting and riots.

The legal proceedings against Zuma, who is charged with multiple counts of corruption, have been seen as a test of post-apartheid South Africa’s ability to enforce the rule of law.

The former president, who has denied wrongdoing, was jailed for contempt after he defied an order to attend an inquiry into high-level graft. The violence has worsened as Zuma challenged the 15-month term in the country’s top court on Monday.

Soldiers have been deployed to help support the police and “restore order”.

Any confrontation with soldiers risks fuelling claims by Zuma and his supporters that they are victims of a politically motivated crackdown by his successor, Cyril Ramaphosa.

Here are the latest updates:

IN PICTURES: Violence and looting escalates in South Africa as Zuma jailed

The death toll from five days of violence in South Africa has risen to 72, police said Tuesday, despite President Cyril Ramaphosa’s deployment of troops to quell the unrest.

“The total number of people who have lost their lives since the beginning of these protests …has risen to 72,” police said in a statement.

Most of the deaths, the forces, said “relate to stampedes that occurred during incidents of looting of shops”.

Others were linked to shooting and explosions of bank automatic cash machines.

Tumelo Mosethli, a South African entrepreneur based in Johannesburg, said jobs being lost as a result of the unrest will “exacerbate” the current situation.

“We don’t need this – to see people’s shops and businesses being gutted,” he told Al Jazeera.

“Yes, people are hungry today, but tomorrow there’ll be more unemployment, more pain, more suffering in a nation that is trying to recover and rebuild itself.”

“It is calm, I think we have military police and soldiers deployed here now, they weren’t here earlier in the day,” Miller said.

“But I also think there possibly isn’t anything left in the stores to loot,” she added.

Tim Murithi of The Institute for Justice and Reconciliation says that while the protests following Zuma’s arrest was expected, the large scale of the uprising was “unexpected”.

“I think what was unexpected was the broad scope, and the wide extent which we’ve seen the uprisings in a number of different cities and towns across at least two provinces,” he told Al Jazeera from Cape Town via Skype.

“The key point is this really reveals the multi-layered nature of the crisis … social, economic disparities, social exclusion that goes back to the apartheid legacy in South Africa, combined with years of misrule, paradoxically, by Mr Jacob Zuma between 2009 and 2018.”

South African farmers have been hit by days of unrest and looting as trucks carrying produce are prevented from delivering to markets, threatening food supplies, industry officials said.

“Farmers have already had major losses because they cannot get their products to local markets and to shops,” Christo van der Rheede, executive director at the country’s main agricultural body AgriSA, said.

One of AgriSA’s farmers has already reported the loss of 3 million rand ($205,333) of perishable produce that could not be transported, van der Rheede said.

No peace until Zuma released – foundation

“Peace and stability in South Africa is directly linked to the release of President Zuma with immediate effect,” it said in a Tweet.

Peace and stability in South Africa is directly linked to the release of President Zuma with immediate effect.

It was just pure malice to incarcerate President Zuma whilst litigation on his Detention Without Trial case (for a civil contempt) was on-going.#WenzenuZuma

“The violence could have been avoided. It started with the decision of the constitutional court to detain president Zuma … This is what gave anger to the people,” a spokesman for the foundation told Reuters news agency separately.

More than 400 people were arrested in Gauteng, but the situation was far from under control, he said.

Al Jazeera correspondent Fahmida Miller, reporting from Johannesburg, says the deployment of troops on the streets was now helping to quell the protests.

“Over the last two or three hours … police were struggling to manage what’s been going on and now that there are soldiers here in the last hour and a half there is somewhat of a difference,” she said.

“There are a couple of streets that are deserted and certainly there is hope the presence of the army will quell some of the riots that we’ve seen.”

South Africa’s health department said violent protests had disrupted the rollout of COVID-19 vaccines and essential healthcare services such as the collection of chronic medication by tuberculosis, HIV and diabetes patients.

The department said in a statement it was temporarily closing some vaccination sites, adding anyone with an inoculation scheduled in an area affected by ongoing unrest was advised to defer their vaccination.

Currency nosedives amid spread of violence

The South Africa rand, which had been one of the best performing emerging market currencies during the pandemic, dropped to a three-month low on Tuesday, and local and hard currency bonds suffered.

At least 45 people have so far been killed during the unrest, 19 in Gauteng and 26 in KwaZulu-Natal, according to state and provincial authorities.