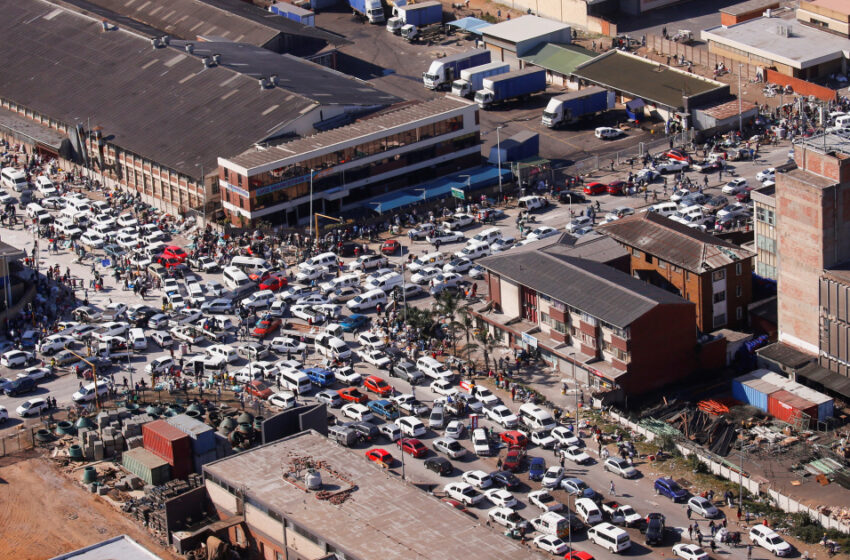 In his first visit to an area affected by weeklong unrest, the South African president says ‘anarchy and mayhem’ will not be allowed to unfold in the country.

The deadly violence and looting that have rocked South Africa for the past week were planned, President Cyril Ramaphosa has alleged, during his first visit to areas affected by the worst unrest in the country’s post-apartheid era.

“It is quite clear that all these incidents of unrest and looting were instigated, there were people who planned it and coordinated it,” he said on Friday.

Ramaphosa made the remarks when he visited Ethikwini Municipality, which includes the port city Durban in KwaZulu-Natal province, one of the worst-hit areas in a week of looting that destroyed hundreds of businesses. At least 117 people have died, some shot and others killed in looting stampedes.

“We are going after them, we have identified a good number of them, and we will not allow anarchy and mayhem to just unfold in our country,” Ramaphosa told reporters.

The government said on Thursday that one of the suspected instigators had been arrested and 11 were under surveillance. In all, 2,203 people have been arrested during the unrest for various offences, including theft.

Ramaphosa did admit, however, that his government could have acted “quicker” to prevent the unrest and expressed concerns about growing racial tensions in KwaZulu-Natal.

Protests broke out a day after Ramaphosa’s predecessor Jacob Zuma, who wields support among the poor and loyalists in the governing African National Congress (ANC) – began a 15-month jail term for refusing to testify to a corruption investigation.

They quickly turned into looting as crowds pillaged shopping malls and warehouses, hauling away goods as police stood by, seemingly powerless to act.

South Africa has deployed more than 20,000 defence personnel to assist police in quelling the unrest.

In one of the largest troop deployments since the end of white minority rule in 1994, the government said 10,000 soldiers were on the streets by Thursday morning and the South African National Defence Force has also called up all of its reserve forces of 12,000 soldiers.

South African Foreign Minister Naledi Pandor said that the government is now in control of most of the areas where there has been looting and riots.

“There are still pockets of areas, where there continue to be some looting,” she told Al Jazeera.

“Local communities have stood their ground to repel any individuals, trying to enter businesses,” Pandor said.

“In the majority, it is now quiet. What we need to do is to maintain stability to start the process of rebuilding,” she added.

Business Unity South Africa (BUSA), a respected business lobby group, has called on the government to impose a 24-hour curfew to quickly contain the unrest.

“This is an emergency unparalleled in our democratic history and requires the state to take immediate action,” it said in a statement on Thursday.

“We believe this must include a strongly enforced curfew in specific areas to clear the streets and allow law enforcement to regain control,” it said.

It echoed fears expressed by Ramaphosa of a disruption to supply chains, including energy, food and the fight against the COVID-19 pandemic.