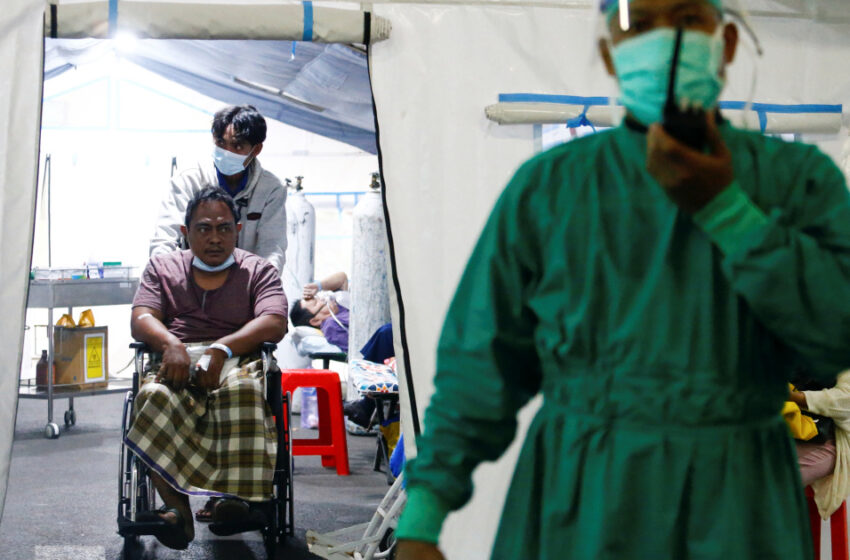 Authorities in several countries – from Bangladesh and Indonesia to Australia and Israel – are racing to contain the spread of the highly contagious Delta variant of the coronavirus, while Russia’s Saint Petersburg announced a record death toll, laying bare the challenges faced by nations worldwide in their efforts to return to pre-pandemic life.

While vaccination campaigns have brought down infections in mostly wealthy nations, the rise of the Delta variant has stoked fears of new waves of a virus that has already killed nearly four million people.

“There is currently a lot of concern about the Delta variant,” World Health Organization (WHO) chief Tedros Adhanom Ghebreyesus told a Friday news briefing.

“Delta is the most transmissible of the variants identified so far, has been identified in at least 85 countries and is spreading rapidly among unvaccinated populations.”

In Bangladesh, authorities announced they would impose a new national lockdown from Monday over the variant, with offices shut for a week and only medical-related transport allowed.

Sydney’s new restrictions apply to some five million people, along with hundreds of thousands of others living in nearby towns.

New Zealand, citing “multiple outbreaks” in Australia, announced a three-day suspension of its quarantine-free travel arrangement with its larger neighbour.

Australia’s COVID-19 Response Minister Chris Hipkins said the suspension would give officials time to consider measures “to make the bubble safer, such as pre-departure testing for all flights” between the two countries.

In Indonesia, President Joko Widodo said the country of 270 million people was facing an “extraordinary situation” and pledged to respond with “quick and appropriate policies”. The country recorded more than 21,000 new infections on Saturday, the highest daily tally yet.

Delta, which was first identified in India in April, is so contagious that experts say more than 80 percent of a population would need to be inoculated in order to contain it – a challenging target even for nations with significant vaccination programmes. The variant is now responsible for more than 90 percent of all new infections in the United Kingdom and about 30 percent in the United States.

European scientists estimate Delta is 40 to 60 percent more contagious than the Alpha variant (B.1.1.7), first discovered in the United Kingdom, which itself was more infectious than the original virus first detected in late 2019.

“It infects more people, it can spread faster,” vaccinologist Dr Annelies Wilder Smith, of the London School of Hygiene and Tropical Medicine, told Al Jazeera. “We saw it in India. We’re seeing it in Australia and Indonesia, in the UK. And I think we’ll see now increasingly in Europe, and indeed, also in the Americas,” she said.

Experts say Delta spreads more easily because of mutations that help it latch onto cells in the body. While several studies have shown that vaccines are slightly less effective against Delta, they are still highly effective – but only after the second dose.

Israel, which has one of the world’s most successful vaccination campaigns, has seen infections linked to the variant surge since dropping a requirement to wear masks in enclosed public places 10 days ago.

After four days of more than 100 new cases a day, the health ministry has now reversed that decision.

Meanwhile, Russia’s Euro 2020 host Saint Petersburg on Saturday reported the country’s highest daily COVID-19 death toll for a city since the start of the pandemic.

Official figures said Saint Petersburg, which has already hosted six matches of the football tournament and is due to host a quarter-final next Friday, recorded 107 virus deaths during the past 24 hours.

Authorities in the Russian city tightened anti-coronavirus restrictions last week in an effort to curb the spike in new infections, including closing food courts in the city’s shopping malls and its Euro 2020 fan zone. This came as Russia has seen an explosion of new cases since mid-June, driven by the Delta variant.

In neighbouring Finland, health officials said they had detected a spike in coronavirus infections that was traced to football fans returning from Saint Petersburg. The Finnish health institute’s director, Mika Salminen, told public broadcaster YLE that more than 120 cases have so far been identified from passengers returning from the Russian city, mostly football fans, and the number is likely to increase.

Al Jazeera’s Paul Brennan, reporting from London, said there have been concerns about a link between the tournament and COVID-19 outbreaks.

“Attendance at these stadiums has been pre-conditional on you actually showing a negative coronavirus test. But that doesn’t stop people’s mingling in the streets and mixing with other members of the public who don’t have to go through these tests,” he said.

Elsewhere, the Africa Centres for Disease Control and Prevention warned infections were also surging at an alarming rate in at least 12 countries in Africa, with the Delta variant leading to unprecedented hospitalisations.

According to the WHO, only one percent of Africans are fully vaccinated – the lowest ratio globally.

Acting Health Minister Mmamoloko Kubayi-Ngubane told the same news conference that it was now likely that the peak of the third wave would surpass the peak of the second wave in January.

In Europe, however, some countries announced the lifting of restrictions even as scientists have warned that Delta was expected to account for 90 percent of all new cases in the European Union by the end of August.

Spain on Saturday brought an end to mandatory outdoor mask-wearing, a year after the rule was first introduced.

The decision came despite the announcement of a major coronavirus cluster in the capital, Madrid, traced to a student trip to the holiday island of Mallorca, with more than 2,000 people ordered to self-isolate.

The Netherlands also ended its rules on outdoor mask-wearing, while easing restrictions on indoor dining and reopening nightclubs to people who have tested negative.

And Switzerland scrapped most of its remaining coronavirus restrictions on Saturday after Health Minister Alain Berset said this week that the country’s use of Pfizer-BioNTech and Moderna vaccines gave adequate protection against the Delta variant.