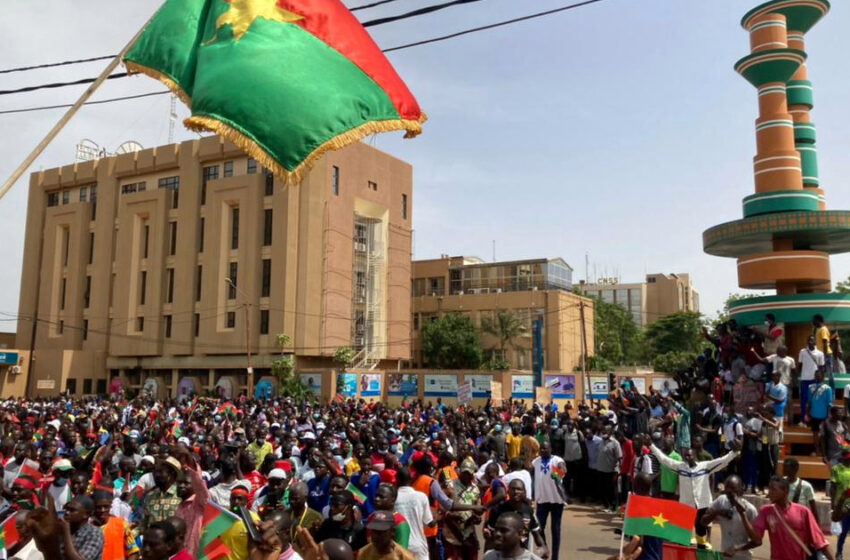 Thousands of people have taken to the streets of Burkina Faso, demanding a stronger response to rising bloodshed after a massacre last month killed more than 130 people.

Some had travelled hundreds of kilometres to attend the opposition-led demonstration in the capital, Ouagadougou, where protesters waved the red and green Burkinabe flag and blew whistles on Saturday.

Armed groups linked to al-Qaeda and ISIL (ISIS) originally based in neighbouring Mali have embedded themselves across the north and east of the country, launching regular attacks on civilians.

“We had to show our dissatisfaction, show the distress of citizens who are crying out for security and peace,” said opposition supporter Alpha Yago on the sidelines of the protest.

One protester held a placard with a photo of flag-draped coffins and the slogan: “Mr President, have the courage to decide. We are fed up!”

It was the first march organised by opposition and civil society groups since President Roch Marc Christian Kabore was re-elected last year.

Kabore had asked the organisers to postpone the march. But opposition leader Eddie Komboigo welcomed “a huge mobilisation across the country despite government calls for a boycott”.

“Today, from Dori to Kampti, from Dedougou to Diebougou, from Ouagadougou to Diapaga, people demonstrated to protest against the worsening security situation,” he said.

“During Kabore’s first term, there were officially more than 1,300 deaths and 1.2 million internally displaced people,” he added.

“It is feared that the second term will be worse than the first because since the start of the year we have had more than 300 deaths.”

Anger has been rising since the night of June 4, when the deadliest attack in years was waged on the village of Solhan.

Armed men – including “young people aged 12 to 14”, authorities said – killed at least 132 people, according to the government.

Local sources said the toll was 160, including many children.

Civil society figure Aristide Ouedraogo said “in light of the latest macabre developments of the security front, it was time to send a strong signal to the leaders to pull themselves together.”

Chukwuemeka Eze, executive director at West Africa Network for Peacebuilding, said many in Burkina Faso have lost confidence in the government.

“Each time there is an attack, the president limits his communication … and people are beginning to feel helpless, they are thinking that the increase in attacks is evidence of the weakness of the government of Burkina Faso,” Eze told Al Jazeera.

“The government needs to engage more with the opposition and the civil society … and [it needs] to develop some kind of community-based early warning system that will be anchored on the people,” he added.

In response to the growing fury, Kabore sacked his defence and security ministers on Wednesday. Kabore himself took over as defence minister.

Despite the presence of thousands of UN peacekeepers, attacks by rebel groups in West Africa’s Sahel region have risen sharply since the start of the year, particularly in Burkina Faso, Mali and Niger, with civilians bearing the brunt.