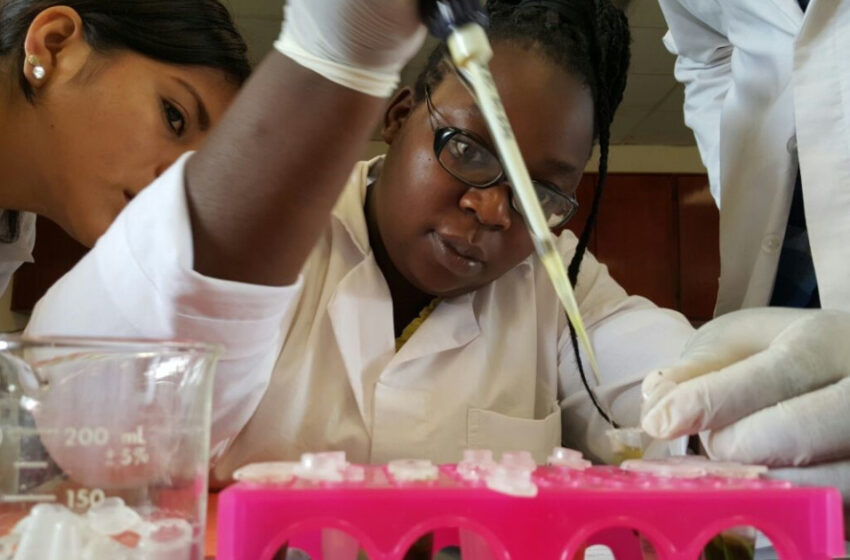 “Oh, they sing! I love their sounds. I love being in a room full of crickets,” enthuses Esnath Divasoni, her eyes sparkling behind her large glasses. Wearing a blue and green dress and black jacket with her hair tied back, she smiles over the Zoom call. “I love what I am doing and why I am doing it,” she says.

The 33-year-old mother-of-one is an edible-insect farmer in rural East Zimbabwe. While people in her village and beyond have been eating insects and worms foraged in the forest or collected during crop harvest for generations, the young entrepreneur has found a way to breed them all year long and in quantities large enough to feed her community and help mitigate the effect of climate change.

In 2020, she set up her edible-insect production unit in a small corrugated-roofed room on her parents’ farm in Marondera, some 100 kilometres (62 miles) east of Harare, the capital of Zimbabwe. Like her parents, everyone in her community are smallholder farmers, growing maize, sugar beans, groundnuts, tobacco and other crops, and tending cows and chickens. Their farm is one of 150 homesteads grouped in three villages, which are settled on a flat landscape crossed by rivers and dams.

Like elsewhere across sub-Saharan Africa, life in the villages is becoming increasingly difficult. The country is in the grip of severe food insecurity, with millions of people already requiring humanitarian assistance, according to the 2020 Global Food Crisis Report Forecast (GFCRF). “Climate variability has become more extreme in the past few years. We have experienced both floods and droughts,” Divasoni explains. This has reduced crop yields and led to malnutrition, hunger and poverty – and also a drop in education because when resources are limited, parents cannot afford to send their children to school, she adds. Zimbabwe is one of 10 countries in the world where fewer than 20 percent of infants receive a minimally adequate diet, compromising their lifelong quality of life, according to the report.

When Divasoni was growing up, her parents valued education but did not have the means to pay for secondary school for all their children. “At the time, with family resources so limited, it was normal for a 15-year-old to get married, and many believed that the highest achievement of a woman was marriage. So my four sisters married early,” Divasoni says.

But she wanted to study and a scholarship from the international NGO CAMFED (Campaign for Female Education) allowed her to go to secondary school, then to university in Costa Rica, becoming the first person in her village to leave her family to study abroad.

She is now one of two core trainers in the CAMFED Agriculture Guide programme, showing young women from poor rural backgrounds how to apply innovative and Indigenous farming techniques to help them adapt to and fight climate change. So far, Divasoni and her partner have trained 320 Agriculture Guides across several districts, and these new trainees are now cascading their knowledge to other women across the country. They focus on women because they are often the first to feel the effect of climate change as they work the land and feed their families. In many parts of Asia and Africa, women make up 60 percent of the agricultural labour force, according to the Food and Agriculture Organization (FAO).

Proteins of the future

While studying Agricultural Sciences at EARTH University in Costa Rica, Divasoni was determined to find a way to fight malnutrition and food insecurity in her community and beyond. “I love eating insects, so I researched them,” she laughs. “Growing up, we used to pluck worms from trees in the summer and we followed the harvest with plastic bags to collect insects. Everyone was doing it and the trend continues today.” But she wanted to find a way for families to have a more plentiful and regular source of insects than the handful they could only collect during certain times of the year.

Crickets, she discovered, are a sustainable and affordable source of protein. “They are very nutritious. They are low in fat and high in protein, vitamins and minerals,” she says. What’s more, they require very little resources and, unlike cattle, produce almost no greenhouse gas, she adds.

Native to the region, crickets do not fly and have many predators, such as lizards, mice and chickens, so there is no risk of them escaping and creating a plague like locusts, which are devastating crops all over Africa. When she was young, people tried to harvest locust swarms, she remembers, but she would not advise this now as they are likely to be full of pesticides and other chemicals intended to eradicate them.

Having settled on crickets, she tried to design a simple, cheap and user-friendly way to breed them, so other women in her community could learn to do the same.

Anyone could set up a cricket farm as it requires so little space and equipment, she says. Hers is a simple five-by-seven metre room with rows of large blue and green washing tubs stacked on two shelves. ”I didn’t buy anything. I use everything around me. We have to be very creative,” she says. “The feeding containers are the big washing dishes you wash your blankets in”, which she covers with a cloth. She adds egg cartons for the crickets to hide under as they like to do in the wild, and recycles supermarkets’ meat or fruit plastic trays for them to feed from. Other everyday containers serve as incubators and water dispensers.

Once a week, she feeds her crickets a specially concocted diet of dried beans, sorghum and a bit of calcium, boosted every five days with scraps from the kitchen and vegetables from the garden. “I use only local resources, so don’t need to import soy or anything else. And what I put into the crickets goes back into the garden because their poop [high in nitrogen and phosphorus] is a great fertiliser,” she explains.

When the crickets have matured after five to eight weeks, depending on the temperature, their eggs are collected to start a new production cycle, and the adults are harvested. A few seconds in hot water kills them, then they can be boiled in slightly salted water, fried, toasted or dried to add to broths and soups. An adult cricket can grow to three centimetres long and one centimetre wide. “They are big lumps of proteins” with edible legs and wings, which taste a bit like fried chicken skin, she says.

At first people in her community were sceptical. “They never considered that you could grow insects. For them it was a waste of space and money. They were telling my parents: ‘Your daughter went abroad and now she is bringing this American thing in the community’,” she smiles. “But now, it is a normal thing.” She reserves her crickets for her family and friends and sells the rest on the market at $1 for a pack of 50g of dried crickets.

A family of four or five people needs about 100g to 200g of insects for a nutritious meal. They are usually served with sadza, a staple dish made out of fine maize, which is rather bland, so the crispy, salty crickets add flavour.

Divasoni now has 20 tubs producing about 1,000 crickets each or about 1kg of high-quality protein every five to eight weeks. She says that producing the same quantity of chicken meat would require twice as much feed, four times more space and 10 times more water.

“Insects are a climate-smart way to produce proteins. They are the proteins of the future,” she says. Her plan is to create a large network of edible-insect farmers first across the community, then further afield. She has already trained 15 women in her community and each has started to train an additional four women, so they can all feed their families and generate an income. “I am not just doing this for myself, to make a profit, but for other women as well, because fighting malnutrition is not a single person’s journey.”

‘The kids love the meal’

It is too early to assess the dietary and financial effect of edible insects on the community, as the women have just started growing them and their output is still limited. But many say they are grateful to have learned a new way to feed their families. “This is a welcome intervention,” says Judith, a 65-year-old who looks after four of her primary school-aged grandchildren. “We had lost all our chickens to a disease outbreak. But now, we have a source of animal protein and the kids love the meal with crickets.”

Divasoni believes that her model is replicable in other regions of the country and across Africa. There are already many cricket farmers in Kenya, she says, and the country’s Jaramogi Oginga Odinga University of Science and Technology in Bondo has an entire department dedicated to insect production and research for both human and animal consumption, funded by the World Bank.

She sees her edible insect farming and training as complementing her leadership role with CAMFED Agriculture Guides, showing women and young people how to improve the productivity and sustainability of their farms through climate-smart methods of soil conservation, irrigation, fertilisation, pest management and agroforestry.

“I am working with my community to mitigate the effects of things that have happened many generations from us and in many cases in places far away from us. With the little, but mighty things we are doing, we are able to reduce the impact of climate change in our own lives and build resilience for future generations,” she says.