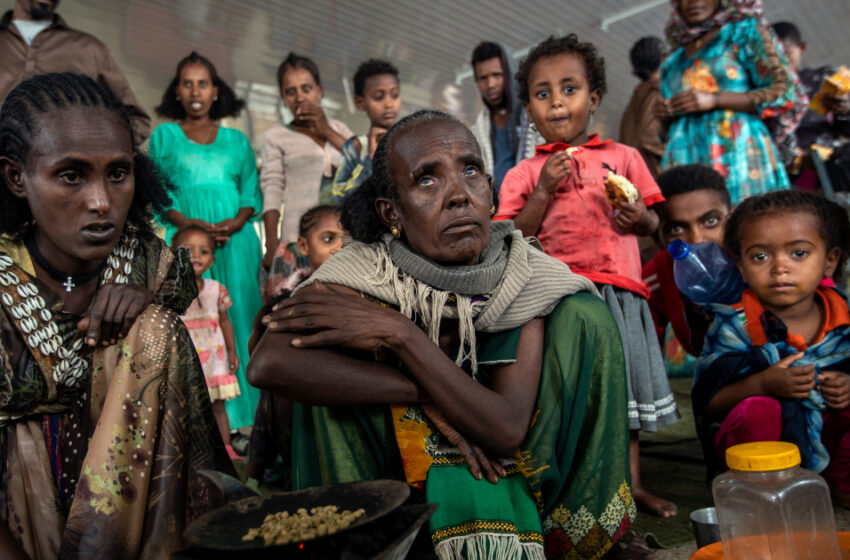 United States President Joe Biden has called for a ceasefire and end to “large-scale human rights abuses” in Ethiopia’s war-torn Tigray region, just days after the US imposed visa restrictions on Ethiopian and Eritrean officials accused of furthering the ongoing conflict.

In a statement on Wednesday, Biden said he was “deeply concerned” by escalating violence in Tigray and “the hardening of regional and ethnic divisions” in several parts of the country.

“The large-scale human rights abuses taking place in Tigray, including widespread sexual violence, are unacceptable and must end,” he said.

Biden also called on Eritrean and Amhara forces to withdraw from Tigray and for authorities to grant “immediate, unimpeded humanitarian access to the region in order to prevent widespread famine“.

“Belligerents in the Tigray region should declare and adhere to a ceasefire, and Eritrean and Amhara forces should withdraw.”

Thousands of people have been killed and hundreds of thousands forced from their homes in the Tigray region since November, when Prime Minister Abiy Ahmed sent troops to detain and disarm leaders of the regional ruling party, the Tigray People’s Liberation Front (TPLF). Five million people also are in need of aid.

Biden’s comments come after the US State Department on Monday announced it was imposing economic and security curbs on Ethiopia, as well as visa restrictions on current or former Ethiopian and Eritrean government officials and members of the countries’ security forces.

The visa restrictions also applied to other individuals, including Amhara regional and irregular forces and TPLF members, believed to be “responsible for, or complicit in, undermining resolution of the crisis in Tigray”, the department said.

US Secretary of State Antony Blinken said the measures were designed to press for a resolution to the conflict but the Ethiopian government accused the Biden administration of meddling in its internal affairs.

On Monday, Ethiopia’s foreign ministry said if the US restrictions continued, Addis Ababa “will be forced to reassess its relations with the United States, which might have implications beyond our bilateral relationship”.

“The attempt by the US administration to meddle in its [Ethiopia’s] internal affairs, is not only inappropriate but also completely unacceptable,” the statement from the Ministry of Foreign Affairs said.

The Ethiopian government is facing mounting international pressure to account for alleged human rights abuses in Tigray, including rape and other forms of sexual violence, extrajudicial killings and forced displacement. Blinken said in March that “acts of ethnic cleansing” had taken place in the region.

Ethiopia has denied widespread atrocities and said on May 21 it had convicted four soldiers for killing civilians or rape, and put 53 others on trial for the same crimes, although the court records were not yet public.

Earlier on Wednesday, the United Nations said it was “deeply alarmed” by reports that soldiers were rounding up hundreds of displaced civilians from camps in Tigray.

The soldiers detained at least 200 civilians from multiple informal camps in Shire, beating them and snatching their phones before forcing them onto trucks, according to accounts from Amnesty International and witnesses.

“We understand how traumatic and distressing the situation is, not only for the relatives of the missing youth but the entire (displacement) community in Shire,” said UN refugee agency (UNHCR) spokesperson Elisabeth Haslund told the AFP news agency.

“What we have observed is that thousands of (displaced) have been fleeing the sites because they don’t feel safe and they believe that the spaces are no longer safe.”

In December, the Ethiopian government had promised “unfettered humanitarian access” but large parts of the region, particularly rural areas, are still largely cut off due to active hostilities, according to an update earlier this month by the UN’s Office for Coordination of Humanitarian Affairs (OCHA).

Parts of central, south and southeastern Tigray have been blocked by parties to the conflict since early March, OCHA said, warning that the scale of food insecurity in the region remained “large and dire”.