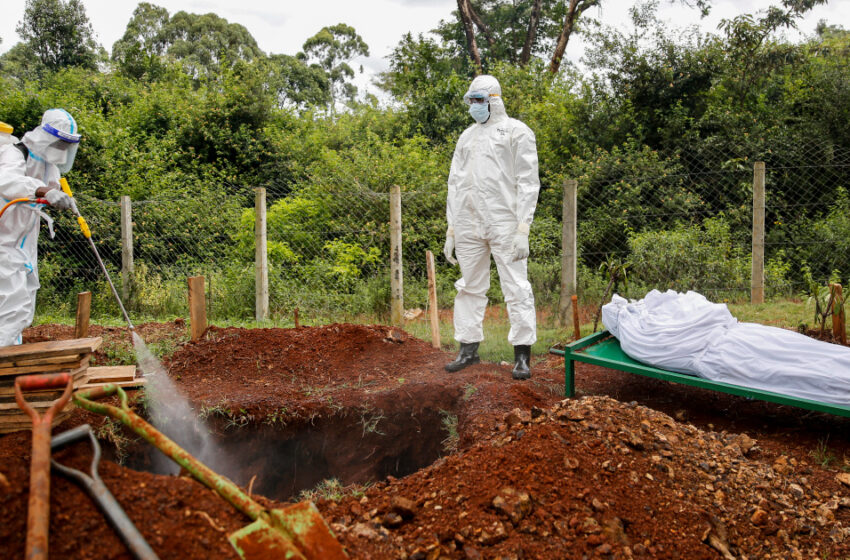 Coronavirus-linked deaths in Africa surged by 43 percent in the space of a week, driven by a lack of intensive-care beds and oxygen, the World Health Organization (WHO) said on Thursday, as the new Delta variant surged on the continent.

Fatalities associated with COVID in the WHO’s Africa region, which includes North Africa, rose to 6,273 in the week of July 5-11, compared with 4,384 in the previous week.

“Deaths have climbed steeply for the past five weeks. This is a clear warning sign that hospitals in the most impacted countries are reaching a breaking point,” Dr Matshidiso Moeti, WHO regional director for Africa told a virtual news conference.

“Under-resourced health systems in countries are facing dire shortages of the health workers, supplies, equipment and infrastructure needed to provide care to severely ill COVID-19 patients,” she said, speaking from the Congo capital of Brazzaville.

#Africa has recorded a 43% week-on-week rise in #COVID19 deaths. Hospital admissions have increased rapidly on the continent — causing a shortage of oxygen and intensive care beds. https://t.co/Fp3jaS6lsG pic.twitter.com/Hosc1AqW8b

The WHO said on Thursday the rise in deaths paralleled a chronic shortage of vaccines, a spread in the more contagious Delta variant, which was now being detected in 21 African countries, along with public fatigue with prevention measures.

Meanwhile, the UN health body warned that “more dangerous” variants of COVID-19 could tear across the world as global infections soared to half a million daily, largely driven by the virulent Delta strain.

“The pandemic is nowhere near finished,” the WHO’s emergency committee said in a statement.

It highlighted “the strong likelihood for the emergence and global spread of new and possibly more dangerous variants of concern that may be even more challenging to control”.

Al Jazeera’s Nicolas Haque reporting from Dakar, Senegal, said scientists say there was a fear that with a lack of vaccinations, the Delta variant will mutate into something more deadly and “that will propagate and spread more quickly”.

“That’s what’s at stake with the vaccination here and so there’s calls for more vaccines that come to the continent.”

Africa has officially recorded more than six million cases of COVID-19, a figure that is far lower than on other continents but one that experts said is likely to be a big underestimate.

On Thursday, one of Nigeria’s largest universities sent residential students home and said it would suspend physical attendance of lectures as fears grow about a new wave of coronavirus in Africa’s most populous nation.

Separately, after talks with the World Bank on Thursday, African leaders appealed for “at least $100bn” in commitments of financial support by year’s end to help their countries “recover better” from the pandemic.

“There’s still a lot to be done to overcome this crisis,” said Ivory Coast President Alassane Ouattara, who opened the meeting in Abidjan.

“Less than 3 percent of Africa’s total population has received a first dose of vaccine, compared to around 54 percent in the United States and European Union.”

Moussa Faki Mahamat, chairman of the Africa Union Commission, called for help to restructure the debt of struggling African countries, which faced “pressing needs for immediate liquidity to buy vaccines and set down the foundations of economic recovery”.

He said the pandemic had caused joblessness in Africa to rise by between 25 and 30 million people, while 40 million had fallen back into extreme poverty.

The meeting was called to discuss World Bank aid for African countries over the next three years.

The aid is administered via the bank’s International Development Association (IDA), which renews the programme every three years.

The talks have been brought forward by a year to help poor countries cope with the effect of the pandemic.

During the last three years, the IDA has allotted $22bn annually on average. Of the 76 beneficiary countries, 39 are in Africa.

In May, the international community promised at a meeting in Paris to help Africa fight the pandemic, but did not give a figure in monetary terms.